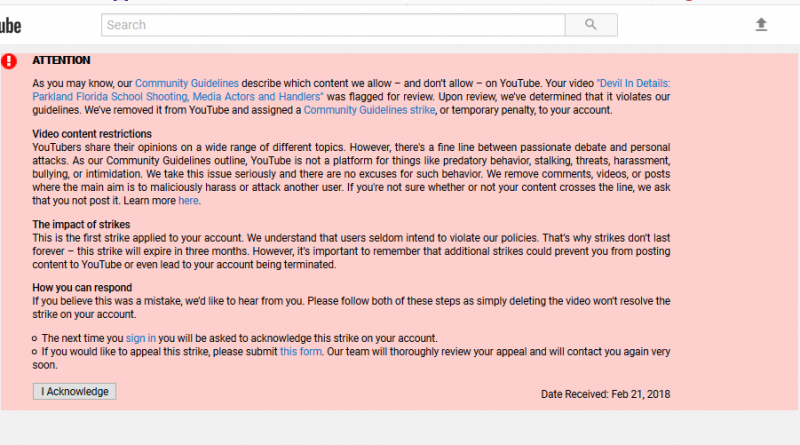 Shades of things to come friends. I know it is hyped up fakery, I know it is meant to distract and I also choose to take note. YouTube, Twitter and the large data mining conglomerate Google are actively censoring content.

Mike Adams had an article up about Google blacklisting his site Natural News, I can’t find it now. Also the Infowars YouTube channel has received a strike and with two more can be taken down just as the Richie from Boston channel was deleted. Just now I “googled” to find the well written article about Infowars YouTube strike and guess what? Nothing but lame stream media came up and all leaning in the direction that YouTube  finally noticed how dangerous Infowars conspiracy is. Here is the article on zerohedge.com.

Our friends, Randy Maugans and Emily Moyer also recorded a YouTube video about the Parkland shootings, it’s a good one. YouTube scrubbed it with this message:

If you listen to this video, now uploaded on OffPlanet Media, Randy and Emily put together some startling pieces, the things that only those who were part of programs as children can recognize. While listening I had a sudden body jolt as I remembered my TV appearance on Capt. Kangaroo when I was about 8 years old. I’ve often wondered about my affinity with those who were in the MKUltra programs and somehow the surfacing of this memory confirmed my own programming as a child.

The price of freedom is eternal vigilance.
Post Views: 379

One thought on “The Parkland ‘Shootings’ and Censorship”