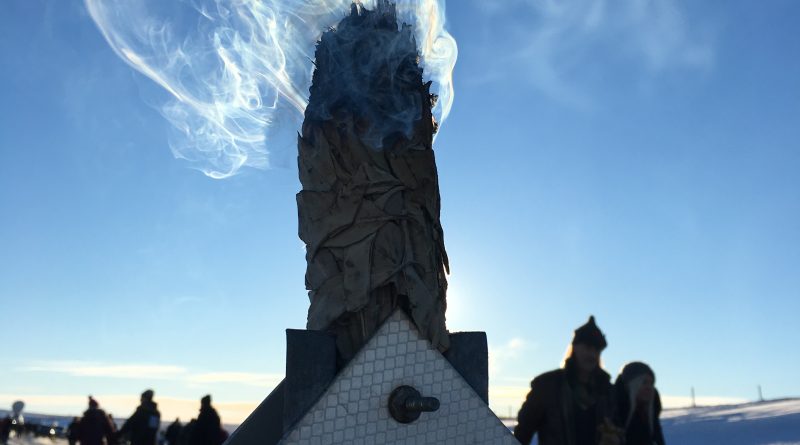 Preface; I got stuck in the blizzard so camped in my jeep at the Prairie Knights casino as hundreds spent the night on the floor throughout the hotel. Tired today not knowing for sure if I will get back to my sanctuary at Sacred Stone as the wind continues to howl.

UPDATE from December 4th 2016: This writing will contain two dynamically opposing realities, since I have so little time to be on my computer these days.

FULL ALERT: As the veterans gathered to walk to the barricade the announcement came of DAPL and their anon agents removing the barracks and their dark presence from Turtle Island, what felt like a victory was short lived celebratory mood. Energy Transfer Partners (DAPL financial corporation) quickly put out a letter to their multi-national investors assuring them that the pipeline would be completed and they would go ahead and drill and pay the $50.000 dollar a day fine. This is now verified through multiple channels.

Friends this is a further blatant indication that the United States of America and most of the world is being ruled by the lawless corporate terrorists who have paid off politicians and world leaders to allow them full swing; that is the swing of a bully club, water cannons, attack dogs, rubber bullets, LRADS, mace and pepper spray on the People who stand in Peace courageously protecting the Water of all Life.

I am now in my jeep, the battle worn Diana as the wind buffets her around with snow piling up in big drifts. Such is the wonder of my life and the challenges being met head on.

Below follows what I truly want to share; the  beauty of Humanity emerging in unity. Life is raw here stripped down to survival, not only our own but that of our Earth.

Blessings on this cold morning at Standing Rock – Sacred Stone camp. Sitting in my jeep, she’s a little bruised though she is awesome in her support. Waking as I do at 3:30 AM gives me a magical time to listen deeply and it is from this place I will share.

One can hear the Spirit world easily lying on the Earth at night with our Mother speaking in the silent space of love encouraging Humanity’s rising consciousness. She blesses me every day in waves of communion with her children, this I will share in a few short video clips of truth speaking individually; the journeys, the discoveries, the magic of the transparent heart.

Walking through Oceti Sakowin main camp yesterday presented opportunity after opportunity to heart connect with so many. Here are their stories in their own words. 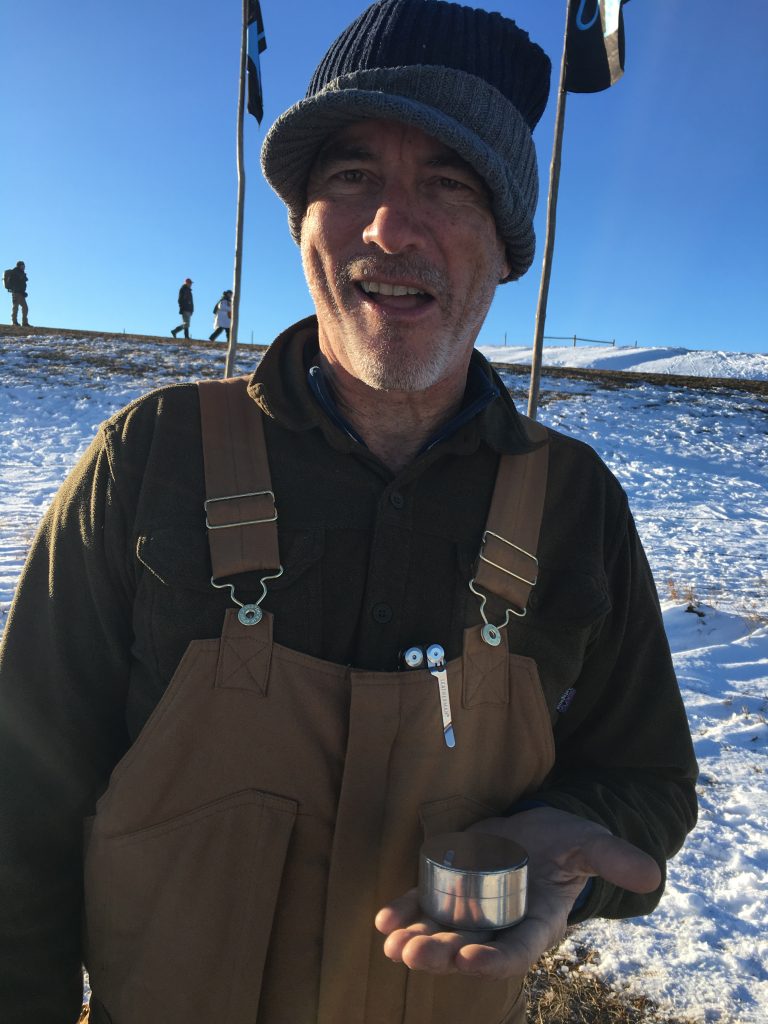 My deepest encounter was meeting Clark Fitzgerald’s father holding his son’s ashes. Clark and friends rolled their mini van coming to Standing Rock, he was thrown from the vehicle and died. Tears well up in recalling this strong brave man, Jay Fitzgerald, standing alone looking over the gathering with the radiant sun blazing at his side. Never sure what moves me though surely it is a divine hand I approached him and we shared … more said in the silent communion than the words spoken.

I am searching for words unspoken to evoke the the mix of sorrow and joy that joined in our meeting. Jay’s love for his son beamed from his eyes that shed no tears, the emotion not buried but converted to action, shivers run through me as I recall the energy of Spirit that held the space around Jay.

She speaks in words of eternal love, the Spirit never dies and though Clark has shed this mortal coil yet he lives on, his presence standing right next to his father … thanking him, loving him, honoring him as his father completed what he had set out to do.

The veils are so thin on this sacred land that whispers are heard, listening between the words. 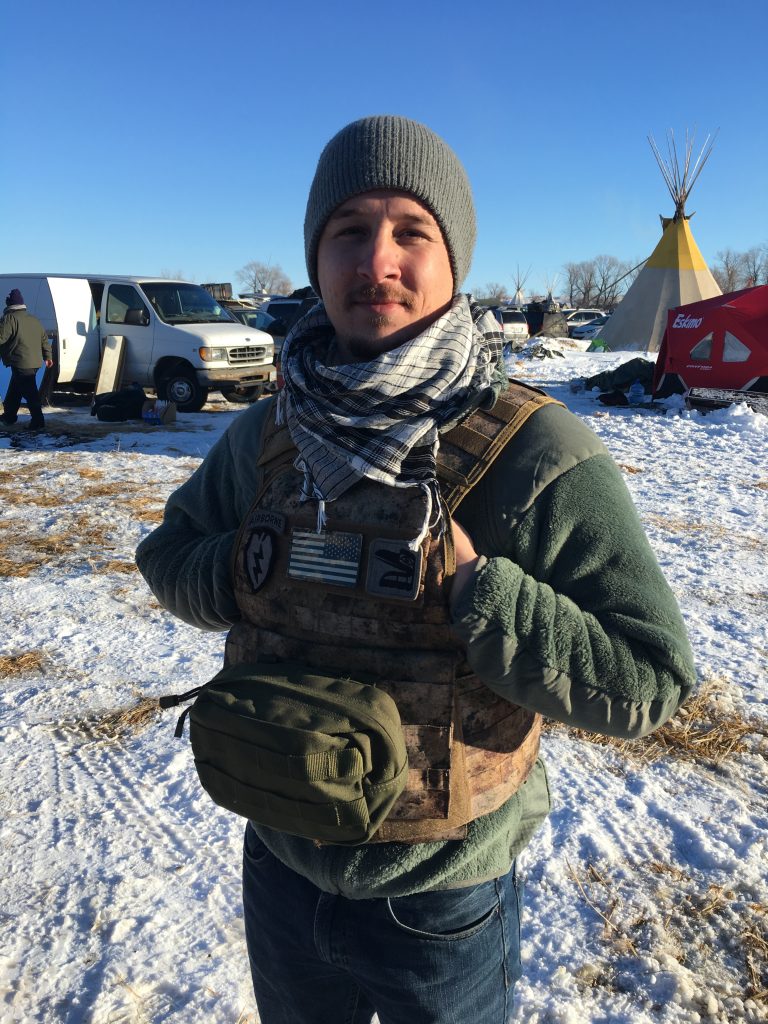 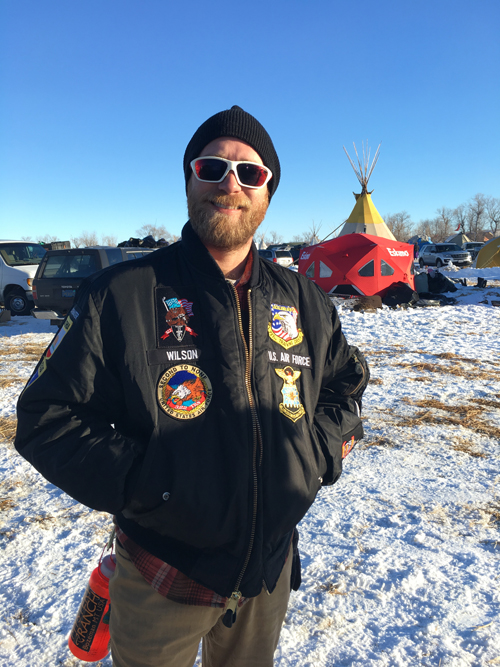 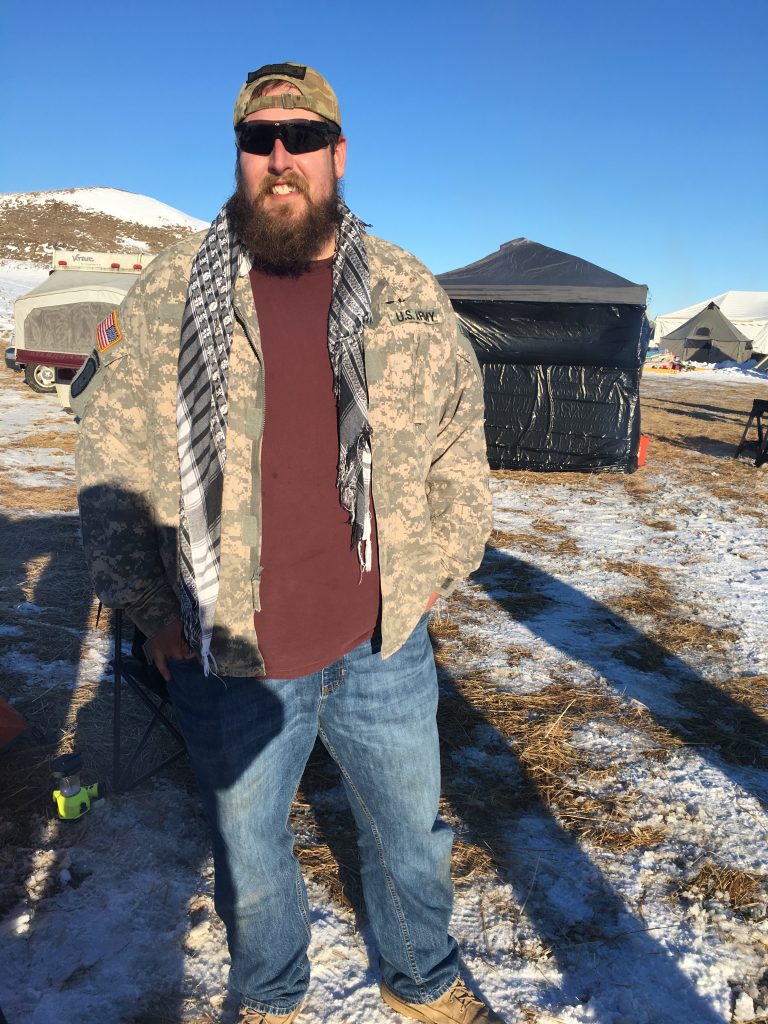 Needing to charge my cell phone I was led to meet Ben, Rudy and Alex, three vets from Washington state who had just arrived and were setting their tents. They so graciously handed me the keys to their truck and allowed me to charge my phone. We conversed for almost an hour in truth speaking truth. Beautiful beings who had served their country only to come to realize just how horrific the lies were that led them to the military. The story continues to reveal, my intent is to film them today or tomorrow for their commitment and beauty shine bright.

I have since spoken with many more veterans who served in Vietnam, Afghanistan and Iraq, often when speaking tears well up and go unreleased.

Ceremony is ever present, sage burns and the medicine people are doing many clearings, gifted with one powerful moment as a indigenous man and woman cleared my body. She held the sage as Michael Tongkeamha swept the space with a bald Eagle wing, it that moment my Spirit soared. Later I came back to speak to this tall man who seemed so solemn and he opened his heart as we communed, something about the human spirit that desires this, to share and be heard. Words will not allow me full expression though perhaps when I visit Michael he will sing the songs of the Lakota as he gave me permission to record him.

Evan, oh beautiful man who so sadly had been shot close to his eye during that horrible night of water cannons, rubber bullets, mace and percussion grenades found some healing as we spoke. Most can’t really comprehend what happen to so many that night, the trauma lives on until they can release it. Sharing some tobacco and granola my heart tells me he has begun to let go. He didn’t want his picture taken as it has already been shared to thousands, pray for peace for this courageous Water Protector.

Lolie, sistar of heart standing in solidarity from Colombia, how clear your voice and healing songs. She another woman wanderer who walks the Sacred Mother Earth, Pachamama in service to all Humankind. She is flow in action.

My walk to the barricade felt epic in its nature, this day Spirits flew high and there was an indescribable real joy in the sparkling air. There are so many people walking together. Yes, the wounds and traumas are still carried yet the sense of inner purpose to finally stand up and claim our power, our sovereignty, our Earth and Her Water is giving many a new breath of Life, fanning flames once dimmed.

It is with humility I speak endeavoring to do justice to what can barely be contained in words. 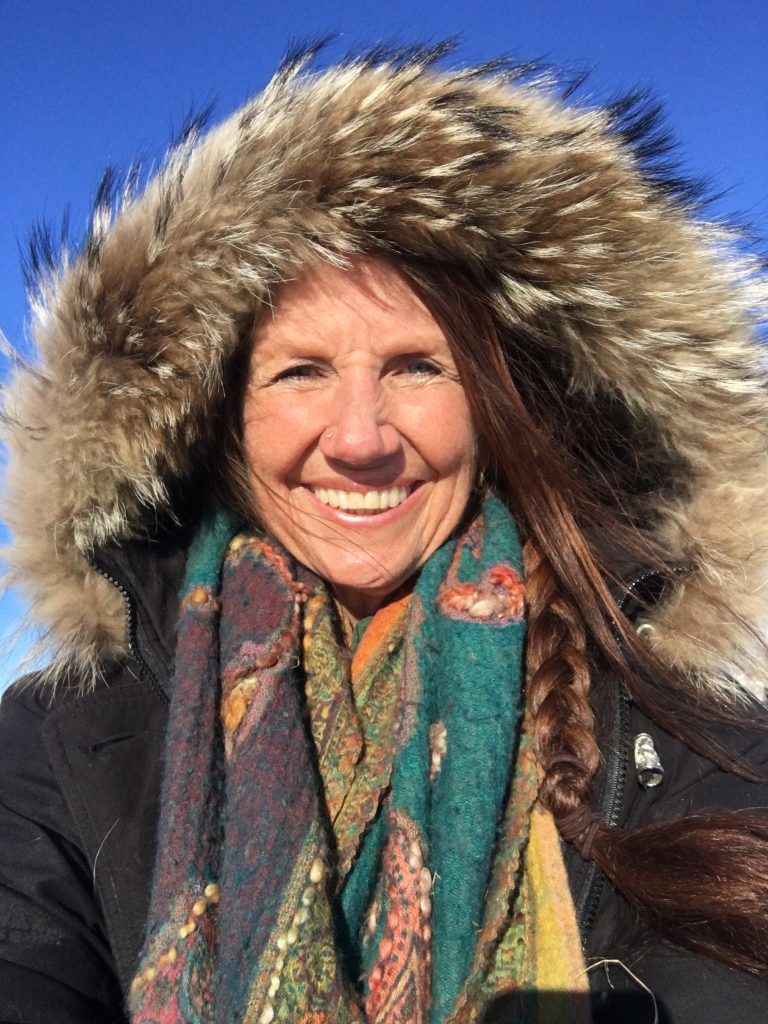 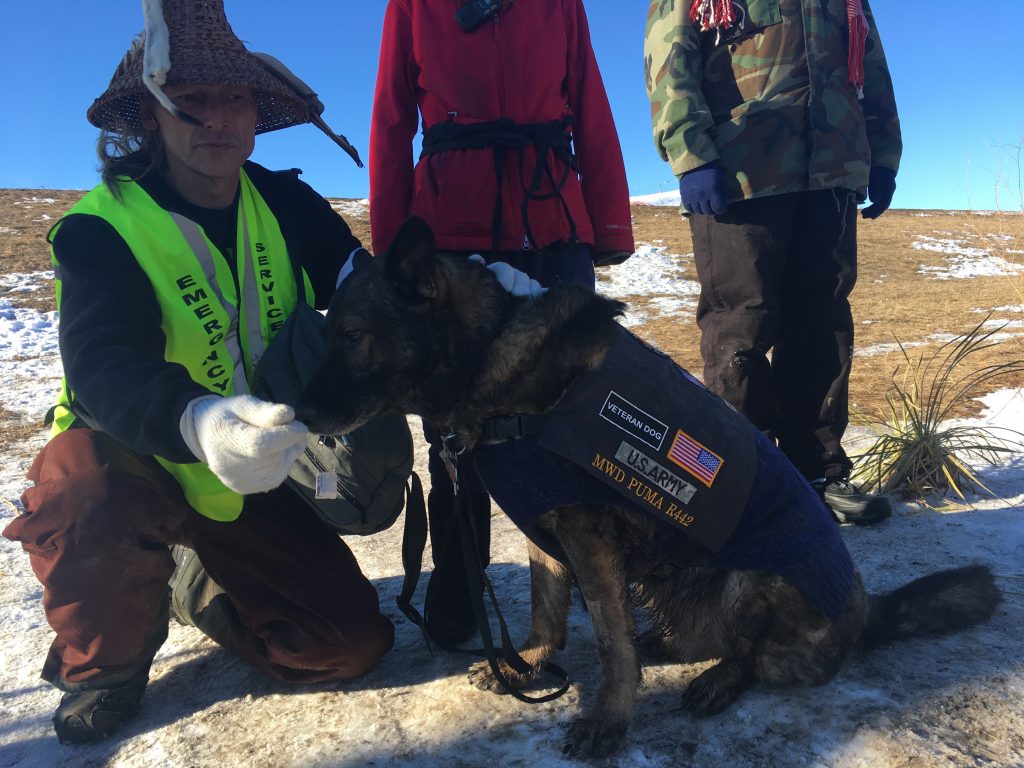 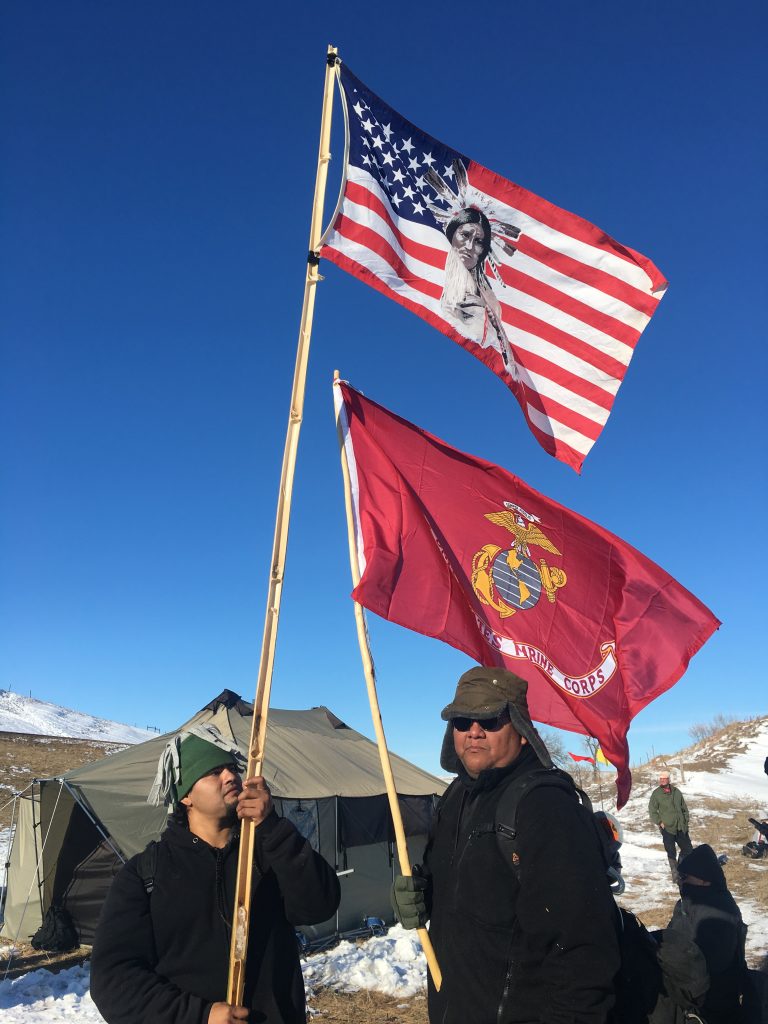 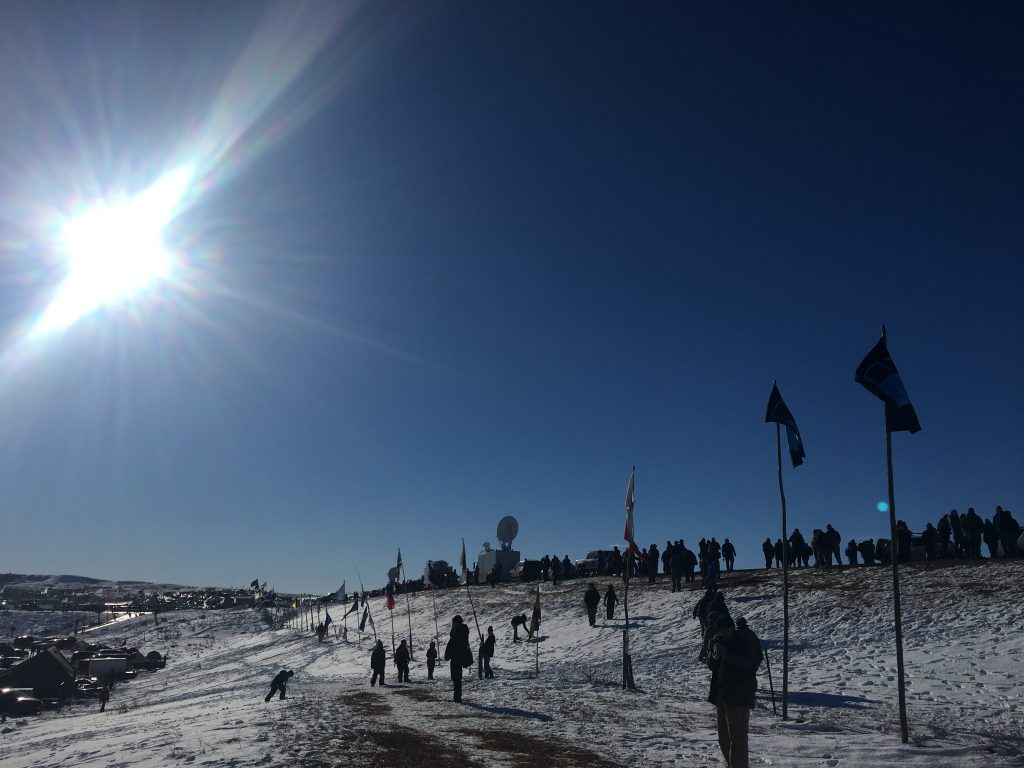 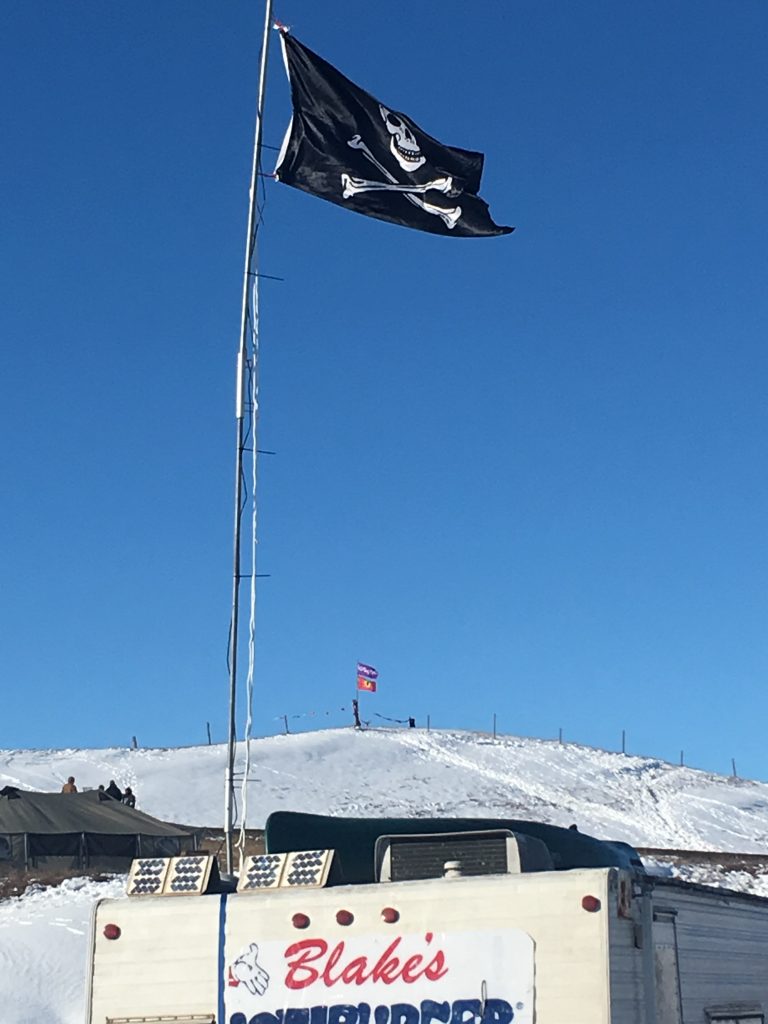 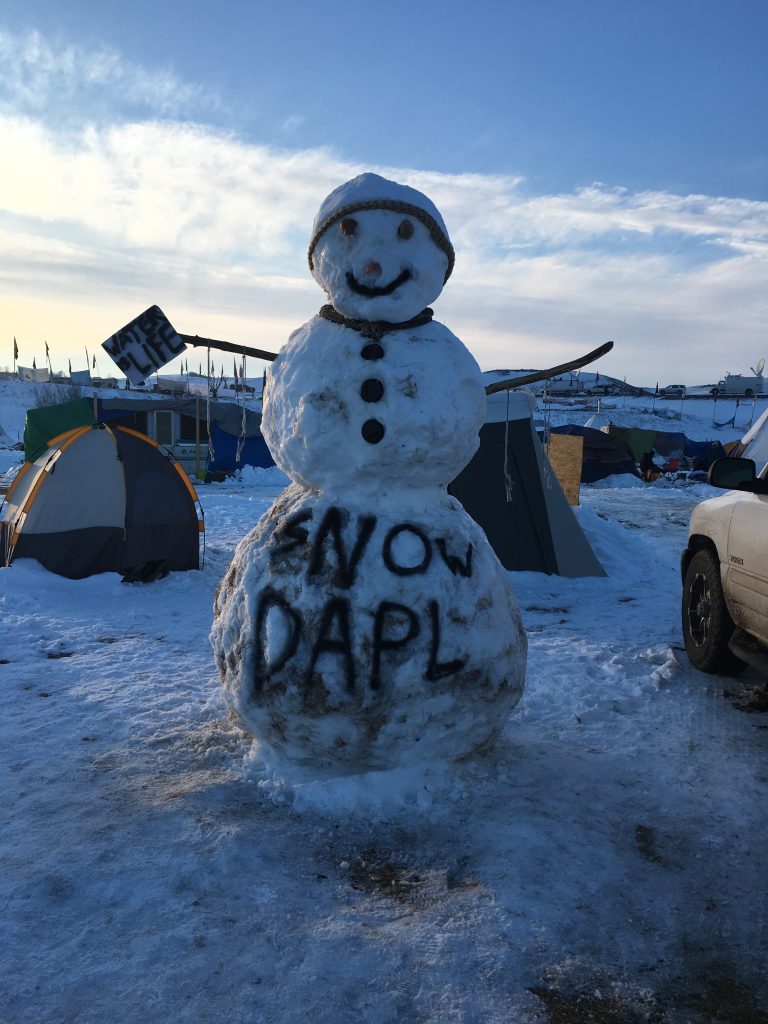 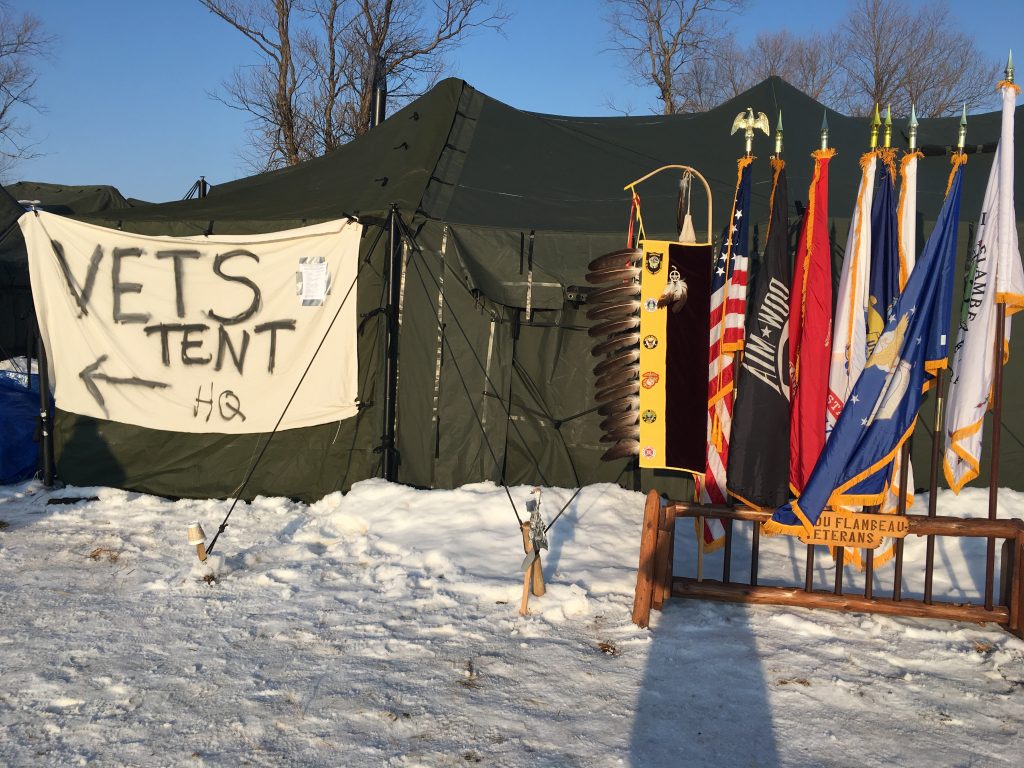 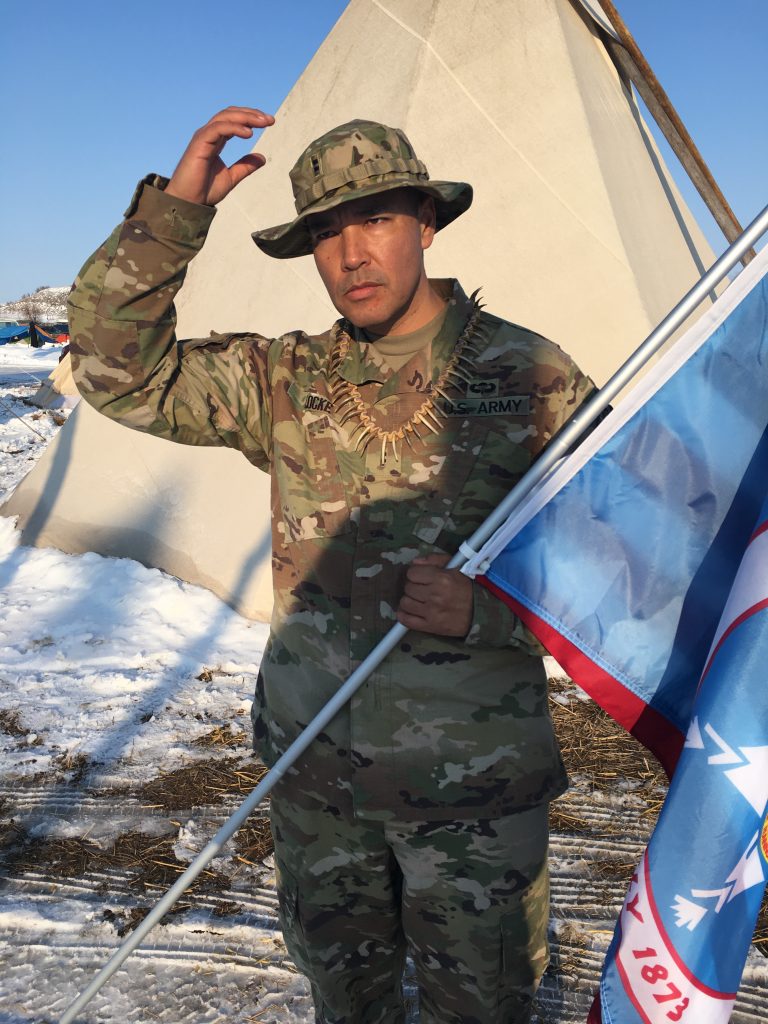 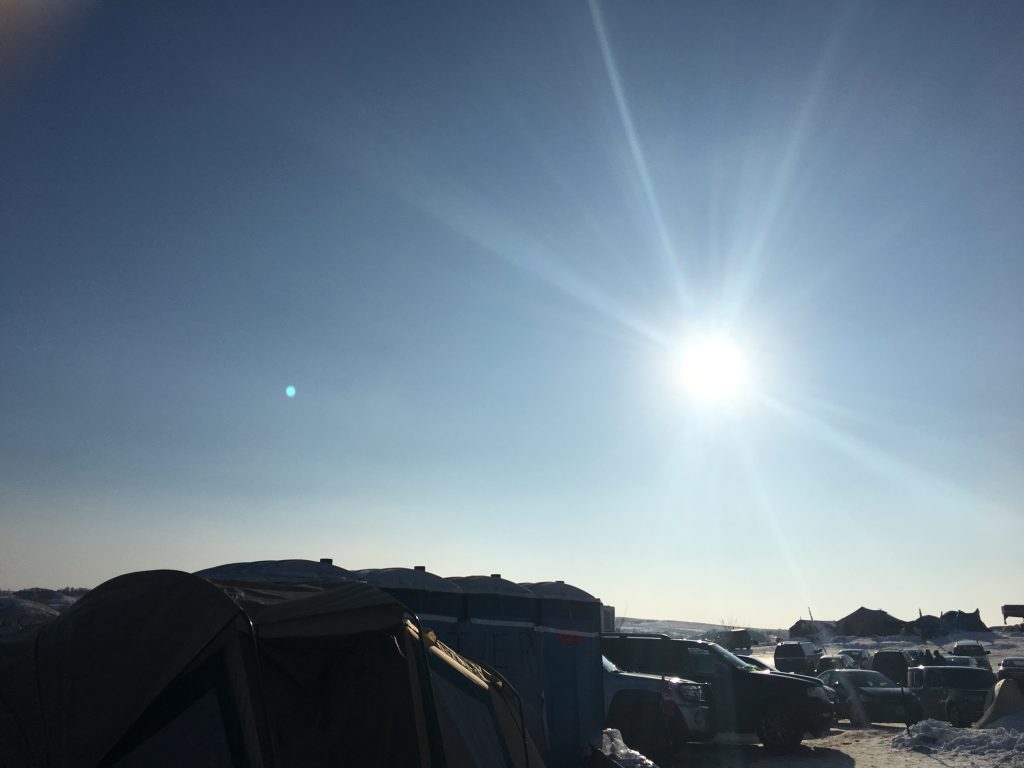 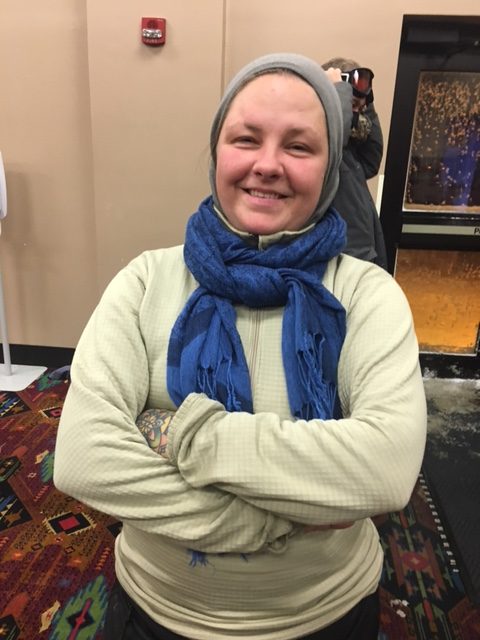 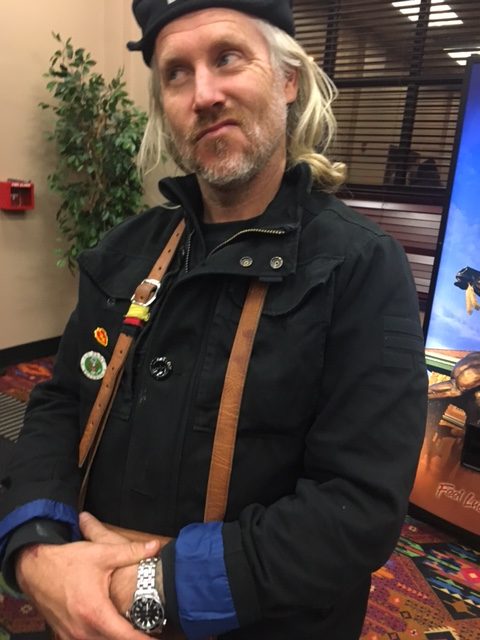 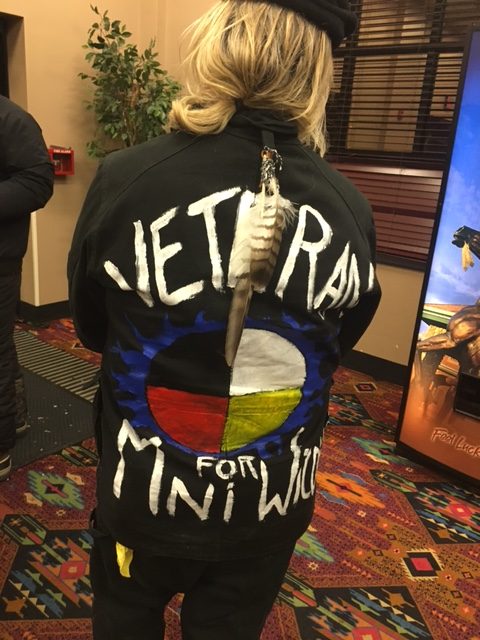