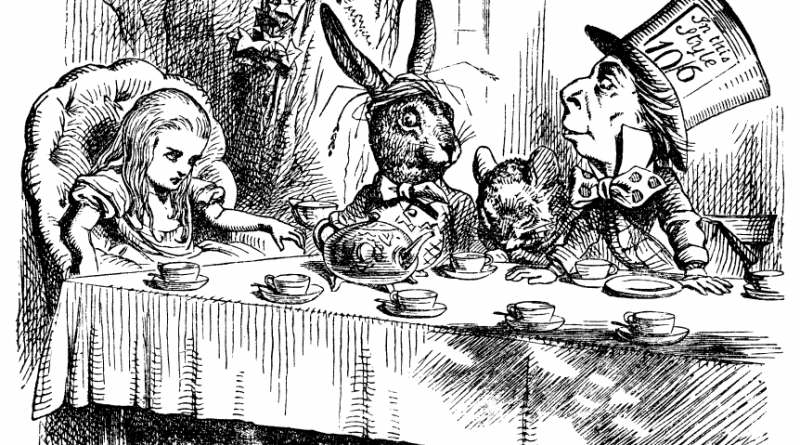 “Alice thought the whole thing very absurd, but they all looked so grave that she did not dare to laugh…“

I was going to write about synthesizing information, oddly that provoked me to sit here staring blankly at the screen. Questioning each moment has become my new normal these past weeks as so many waves are crashing ashore right now. How can we interpret the raging of fueled fires, the unbelievable stories of mass shootings, the Saudis killing off their own? One simply feels it in their bones this movement toward an undefined future.

My object in writing today was to synthesize the onslaught of the past week’s news and not just the purposefully shocking stories for along with them comes openings, opportunities, and the honed ability to see through the ploys. Somewhere in the mix of my brain waves however is something else, it reaches way back in time and recalls we’ve walked this way so many times before … The news is anything but new, it is repackaged human drama that is scripted by an unseen hand.

In order to synthesize I am called to be synthetic, like a chemist in a lab called to create meaning out of disparate elements. Meanwhile my body longs for the magic of photosynthesis. How is it that the mind, the logic, the analysis of data has so supplanted our core nature that we have been lost in the labyrinth for eons of time, circling, circling the sun without recognizing that we are the sun.

Spiraling toward center from here, compressing complexities down to simple explanations. Oh! but how my mind longs to jump in here with a taunting phrase or a sharp juxtaposition of reason. There is a conundrum within reason for it only takes us so far, no calculation will allow us to see the future as it is yet unformed.

She sits quietly for a moment to gather into herself a more total view.

It takes a courage and resolve to not return to the deeply rutted trail of habitual thinking. We are being squeezed into a desired reaction by these “news worthy” stories that flood our consciousness. Whether we admit it to ourselves or not a part of us wants to dive into some safety net, it wants to secure itself within the fields of chaos yet the knowing self realizes that there is no safety net, only the trap of a carefully spun web set to ensnare us once again in the prevailing status quo. The knowing self realizes that security is not given by bank accounts or socially engineered status while the inner rebel yells.

I do not disparage the logical mind nor the fluid ability that some have to express in linear thought the multi dimensional strands of realities. What I feel though is all together different, it’s a now familiar feeling of entering a void in space, like a pause in a heart beat at a cosmic level. And with each pause there is an opportunity to allow the moment by moment perceptual changes to rearrange the outer order and then the beat goes on.

Yes, we’ve been hammered hard these past few months and I don’t imagine it will stop now for the regime changes were prearranged, what we see happening on our screens has already happened. It’s already old news. Another phenomenon that draws my attention is that these events of staggering (or should I say staged) horror are quickly erased from the news feeds. Last week Las Vegas and eight eye witnesses mysterious deaths, this week Texas with no apparent motivation, next week who know where? Is that what we are supposed to be afraid of? That next week it could be your town, your concert, your forest, your home, your family … Well, the answer to that is yes. That is unless we finally fully awaken to the nature of the beast and withdraw our energy from this fabrication meant to look real. I know it doesn’t feel real to me and that tells me what I need to know. It also provokes some very uncomfortable feelings, this apparent lack of empathy. Okay, now I am getting somewhere, is this part of it too? This onslaught of real bloodshed mixed with fake gives rise to a sense of uncaring, a sense of growing futility,  a direct affront to what we feel coupled to the dichotomy of what we see playing out.

I can breath a little deeper now, the space around me clearing as a simple answer emerges from the quicksands of receding time, there is only this moment and whether it feels compelling or repelling it is what I am given to work with and for that I am eternally grateful.