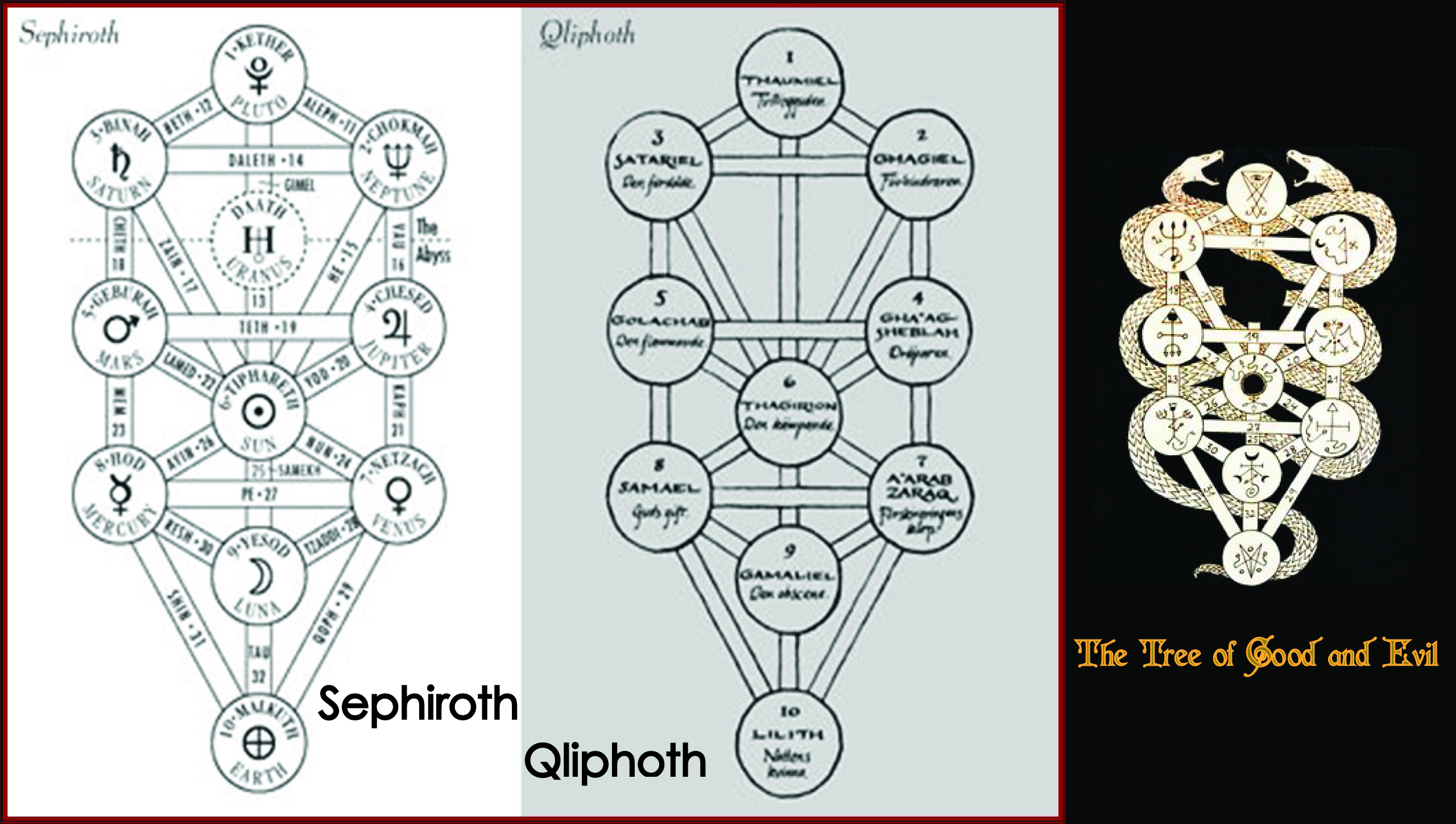 On September 20, 2015 Spiritwind with Christine and karelia engage in a mindful conversation to reveal the hidden dark side and corruption of the information given to seekers of knowledge through the Kabbalah. It seems that we have been having similar revelations so that no matter where we look we see that revealing and confronting the dark side is an undeniably essential part of reaching what we will simply call Peace.

“As above, so below, as within, so without, as the universe, so the soul…”  Hermes Trismegistus

Here are the two links that were the primary sources for the discussion about Qliphoth and Daath. Spirtiwind extracted the parts that capture the essence of what was talked about for easy reference.

The Qliphoth are negative or entropic beings in the universe, and are the opposite of the positive or kaotic beings known as the Sephiroth. The Hebrew root word “qlippah” or “klippah” (plural “qlippoth”) means “shell” or “husk”.

They are, of course, the entropic, unnatural force in the Universe which drives people towards death, self-destruction, and suffering, because this is what the Qliphoth craves as food. Molar Mountre has often explained the Qliphoth to be the forces responsible for the lack of the continuation of human evolution. The reason behind this is that the Qliphoth, who can easily exist in the Great Void due to their “nature”, feed off of Entropy.

The Toroidal Universe:
If the ideal shape of the higher dimensional continuum of the universe is the shape of a tube torus, then the Abyss that the Qliphoth seem to come from is the empty middle of the torus. It is the zero point of the dimensional continuum. If the Qliphoth had to cross the center of this dimensional or temporal continuum to get here (it is likely that this crossing happened at the Fracturing in the times of Atlantis), then they came from the Abyss and their momentum was fundamentally backwards to ours. Instead of living off of the energy of Flow as we do, the Qliphoth lived off of the negative energy of Entropy, or when energy is dispersed, due to death, or other means of Entropy.

Description of Energy Parasitism:
The main way that the Qliphoth recieve energy from people in general is through the viral meme that is called Ego. We are all infected with the dissonant meme Ego, and as a result, we are all feeding the Qliphoth. What the Ego does is divert our energy away from ourselves, and the knowledge of ourselves, and towards the Void within us (Kia), which is linked somehow to the Void where the Qliphoth dwell. Instead of energy and expression coming from the Kia, the polarity is reversed. Energy is devoured, but the Void can never be filled.

Thus all of the sephiroth are interconnected below the surface at the level of the qliphoth with what is nominally called “Typhonian wormholes.” The underworld domain of the backside of the Tree of Life is populated with the dead ancestors, gods and goddesses of the underworld, and the various demonic and sub-elemental spirits and powers.

Aleister Crowley and other occultists have taken some incomplete information from Jewish qabbalistic sources and have given names, qualities and rulers to the ten anti-sephiroth of the Qliphoth.

I would recommend that the forces and spirits of the qliphoth and their wormhole pathways be examined as merely the negative source potentials for the obverse sephiroth and glyph determined pathways. If they have any names or qualities, it would not be just a mirror image of the surface structures of the Tree. They would be the veritable archaic sources for those structures. The backside of the Tree of Life is without morals and spiritual values, and is therefore, beyond good and evil.