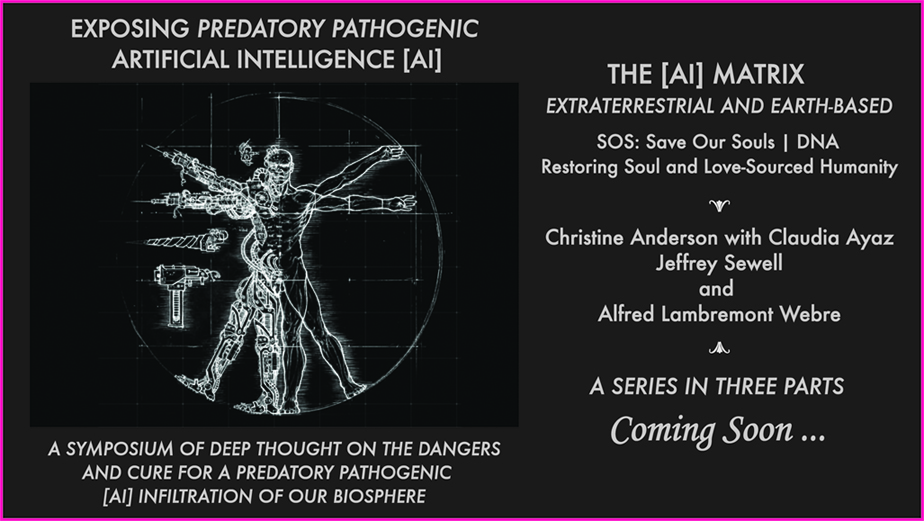 Inspiration comes in many forms. Sometimes it percolates up from an inner moment of revelation, other times it comes from the sharp sting of an outer encounter with reality. It would not be redundant to say that for those of us who are the aware and awakening, that we are swimming in a sea of inspiration as information, in a seemingly densely packed current affecting us all in a constant wave of awareness. A state of being that could be described as profluent, which requires of us to utilize a new set of perimeters and a heightened response ability.

No subject matter is separate from any other, though there is one that stands out among all the conspiracies against humankind and that is the transhumanist agenda , the predatory A.I. (artificial intelligence) and the infection of an alien substance known as black goo. Sorting through the information, in both recent and ancient literature, is a fascinating field of research and one we felt merits the focused attention of a panel of modern-day researchers, deep thinkers, and formidable minds that are able to penetrate outside the box.

Working from a seventy-seven-page Power Point presentation that is the combined work of Alfred Lambremont Webre, Christine Anderson, Jeffrey Sewell (The Metabiologist) and Claudia Ayaz, we have recorded close to ten hours of discussion that will be presented in three parts as soon as we finish the editing.

The beauty of presenting a field of information from multiple view points is not only that it provides the listener with a more comprehensive study, it also allows for the surprise of new revelations and insights to emerge in the moment.

The history of “The Agenda of Transhumanism” is a plague that we can trace back to our ancient past that is now showing itself in the current era with the proliferation of high-tech devices, the use of robotics in warfare, back-engineered systems from alien technologies, HAARP, Microwave proliferation, Scalar energy, geo-engineering, vaccination campaigns, toxic food, GMO, legislation and world governmental bodies that use statues and regulations propagated as laws  to further enslave Humankind. In other words, in a stealth like manner, hidden in plain sight, we are hosting an entity that is soulless and inorganic in its predatory nature.

Deepening into the wisdom of the above statement is needed more than ever, for we have an pathogenic entity that to not know is at the peril of every living being.

Taking on this subject is one we feel merits the full confrontational force of consciousness; if we don’t understand the implications, if we turn away from this, we will become the subservient species on Planet Earth for an agenda that is parasitical and ultimately destructive by its very nature.

We start our series with Part I, which brings in Alfred Webre’s overview of forty years within the world of Exopolitics, the shock he felt when waking up to the reality of the sentient black goo’s presence and his dedication to helping Humankind wake up and discover solutions.

In Parts II and III Jeffrey Sewell leads the discussion with the introduction of Metabiology, the science of As above, so below in the Metamystical relationship of Humankind with their place in the Cosmos. A very large subject matter that brings into our collective consciousnesses just how we are in every sense of the meaning co-creators.

Christine and Claudia bring to the symposium their empirical data as planetary healers and Earth Empaths along with a soul-driven impulse for truth – the Truth that as we are able to embrace it sets us Free. It is the return of the Divine Sovereign, an aspect of our deepest subconscious mind that when touched stirs a longing and Knowing that is the cure and the directional compass for the healing crisis moments in our quadrant of the Universe.

In future panel discussions we will further explore the flowering consciousness that is Us, the ones we have been waiting for. The subject is vast, for it must take into account the very structure of realities to be fully grasped.

The Rising of Humanity is a Collective Work,

One of Honor and Love in service to the Highest Truth we can achieve.