Long, long ago, which is in reality now, we were awake to our true nature and in a constant communion with the subtle field that native people call Spirit. There were no overlays of interfering words, for words at their best can only describe in part what we once gnew fully. There were no religions, no doctrines, no laws outside of primary law which is the way the universes flowed in harmony and in co-relating fields of creation.

There was no need of a savior which I will speak to later in this post.

As we stand firmly in this truth we have begun to re-member and re-access that which was torn asunder. It is well documented that there was a war in heaven, much remains in speculation as to the how and why this happen though there can be little doubt that something extremely destructive happen within our quadrant of this galaxy. What we biblically refer to as the fall of man has its roots in the heavens.

During many years in many sessions that could be described as shamanic type journeys myself and many others have viewed pieces of the fractured crystalline core that I’ve come to know as home.

A few words about these sessions, some lasting more than five hours is that it is known that every human being, indeed all that are spirit in essence can tap into this field, that was the unspoken premise when we started meeting regularly. The viewings on every level contain more reality as to our nature than all the philosophies and what science can tell us. For every discipline, while very useful, must use words, symbols, numbers and graphs to explain what can be known in experience so rarely will one grasp the totality of creation this way. My love of the poetry, mystical writings and music that emanate from the silent realm has found that a few words will magically lift the senses and are the true food for our souls.

More often now my observing self sees that many human beings have consciously tapped into to this subtle field and language is minimally necessary to convey that we intuit; the unspoken word of Spirit. All that is required for any being to tap this field is a quiet mind and an inquisitive open nature. Observing self within self within Self (the Grand Trine) is an alignment of mind, heart and body for when the body temple is activated it feels, not with emotions or a sense of drama but with the most subtle dance like movements that inner form.

The most vital act we can commit to is the embodiment of the gnosis of how creation was formed and is informing in the constant. As we do this we can then project the reality that we inwardly see affecting the whole of the hologram. This needs to obtain a state of continuum or constant.

One of the requirements is that we consciously step out of the construct of time which has it’s initiation in the machine world that is reflected in the world we see. Everything in the construct runs on time and most haven’t yet afforded themselves the of removal this delusional force.

Undeniably this step requires an exercise of our free will and is not completely possible for those who have jobs that depend on hourly wages however with an awareness of only using the clock when absolutely necessary and by stopping making demands of the Universal flow new potentialities open up.

Flow requires that we stay in touch with our core or some say the black whole of the magnetic field that creation emanates from. For myself the study of plasma physics and of the intrepid ones who are on the fringe of the incoming proton fields of information has helped me discard the worn out mechanical model of matter. It takes inner focus to allow the great opening to occur. Life can be experienced as surprising wonder when the open mind sees how every science and spiritual surrender co-relate and lead one to the central sun of their being.

I realize that some reading this post will not fully grasp its meaning for their minds will try to align my words with preconceived beliefs. Anyone who speaks of the world of Spirit intimately knows that it cannot be conveyed to another until they embrace the inner work necessary to shed themselves of what they want to be true. 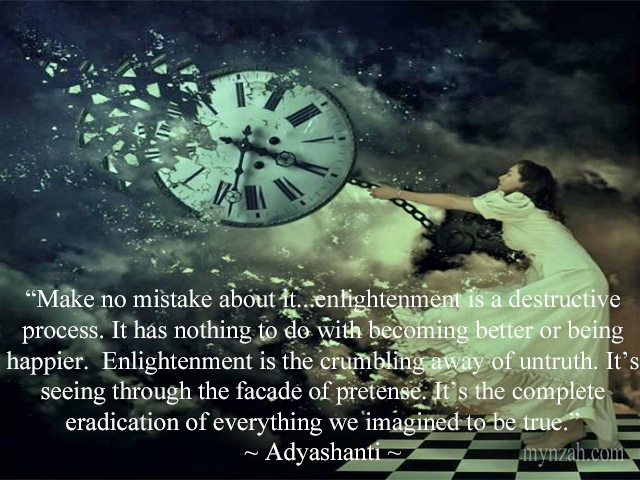 The quote in this image I have used before and I still remind myself that this is a discoverable truth that walks hand in hand with the inner knowledge of who we are.

The facade of pretense is both inwardly and outwardly projected so until we shed the veils of deception we are in process, in the great Work.

There are those who we know as way-showers, there are many on the planet at this time. For a soul to incarnate into the material world and retain contact with pure Spirit is rare. Some we have name and around such beings world religions have been formalized and then been terribly corrupted as to be unrecognizable by the inspiration that formed itself in matter.

Our time now is not one of looking for an outside savior for that has never been possible and is part of the religious dogma that keeps people trapped. The wise soul knows that it can only open passages and to the few with the fortitude to walk through come the immeasurable gifts from the realms of all that is.

My gratitude extends to those many friends who have shared their innate intuition with me, its been a wondrous unfolding that is just the beginning of something truly magical.

” In your light I learn how to love.

In your beauty, how to make poems.

You dance inside my chest,
where no one sees you,

but sometimes I do,
and that sight becomes this art.

Drumsound rises on the air,
its throb, my heart.

A voice inside the beat says,
“I know you’re tired,
but come. This is the way.”

Are you jealous of the ocean’s generosity?
Why would you refuse to give this joy to anyone?

A quick update from my muse, while it may seem as if we can’t find the truth through the contradictory