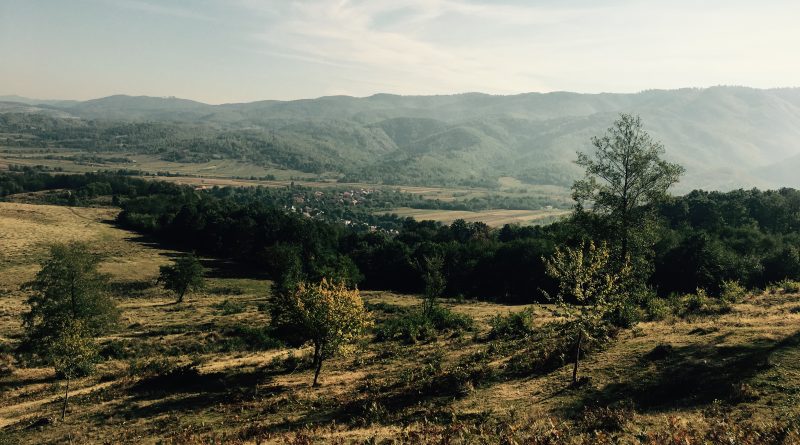 On my first visit to România we were not able to visit Sarmizegetusa as the road was already closed for winter. I had been left with an inner calling to return which we were able to do on the last two days of our travels.

Our two months in România were coming to a close, a journey that neither of us wanted to end. There is a special magic that every traveler with wanderlust will identify with for it pulls the soul toward never ending horizons. Leaving Bucureşti early Saturday morning our sight turned inward knowing that the magical journey can always be found inside. We drove in silence, tired from having to deal with the clashing energies of a world bent for war, tired from seeing the incursion of the modern merchandised world of flashy displays convincing humanity that it needs money to be happy, tired of seeing how easily people believe they have to live in boxes. A sadness colored our mood.

My weeks in Bucureşti were spent as a guest in an apartment in what is called a Bloc. These large looming concrete apartment buildings are left over from the communist era and still dominate the city skyline. They stand in stark contrast with the people who inhabit this abundant land as many still reside in rural settings living life as they always have. I feel gratitude for my hosts who shared their home and the warmth of their kitchen so generously with me. My love affair with this country includes the traditional foods. I was served a surprising soup of lettuce and lovage, a divine fresh tomato soup, ciorbă is the mainstay of every kitchen and restaurant we visited. And then there is Papanași … a dessert that melts the heart in deliciousness. Food shared as we did has a way of removing the differences of culture and language. Meals shared are communion.

România is a very unique place, not only geographically and geopolitically for there is an untouched magic that is palpable though one must listen carefully so not to miss it. There are mysteries to unlock everywhere and my senses were piqued by one of the most mysterious of places, Saramizgetusa.

She will ramble around here, weaving diverse threads into a tapestry she wants to reveal.

In my days wandering the streets of Bucureşti, sometimes alone and sometimes accompanied it was easy for me to stay with my engaged observer. I looked and listened intently to discover that this country has withstood invasion after invasion, never fully conquered though I fear that the western mind set of materialism may do what hordes of armies couldn’t. My hostess joined me one afternoon for a walk in the downtown area, my eyes were drawn to a large bronze statue of a man on horseback, I ask her who he is and am surprised by the answer that he is a Romanian king. She then relates for me that Romania had a German king, I listen not only to her words for in her voice I detect a longing for a better time. She tells me that the German dynasty was a time of peace and prosperity where the people were treated well. I am later to find out that when two vassal principalities united (Moldavia and Wallachia) to form a united Romania along with this was the recognition that the country needed a benevolent ruler to keep her united. Prince Carol was smuggled into the country and installed as king. This confounds the mindset of this century that has been trained to believe that monarchies are the enemy of democracy. I am diverting off course here and only mention this because we modern people are mostly ignorant of those who proceeded us, our ancestors and the battles they faced.

For me România has become the resonant reminder of our origins a land seeped in mystery.

Much has been written about the holographic nature of our reality, the realms within the realms. What I discovered walking in this country were connecting lines, energetic ones if you will to the realms that underlay our human condition. As often happens these days words fail to convey the totality of what is seen and intuited so I will continue with our journey’s tale.

Our drive this day was a long one, we only stopped to stretch our legs a bit speaking very little using our voices to point out something we noticed on the roadside or pose a question or two. Silence was our best companion for we were each in an internal process.

As we drew closer to the Regia of Sarmizegetusa the landscape changed and the energies with it. Our mood lightened on contact with the bubbles of magic around us and a we shared a bit of joy with our laughter. It was late afternoon when we stopped to grab a bite to eat as we considered whether to go the last 20 km to the sacred stone circles that are central to the citadel of the Dacian people or wait for the morning.

As we sat at the wooden table I was struck by a visceral bolt of energy that came with a message: “This is the firmament.”  this was repeated as my mind reeled trying to decipher the meaning. My eyes took in the visuals in front of me, seeing the Bison on the label of the beer we shared, eating Dacian pie (fry bread) as my body shuddered once more, for during the long drive I had continuously seen in my mind’s eye herds of buffalo running across the sky in spirit form. Cristian tells me that buffalo once lived in this area. 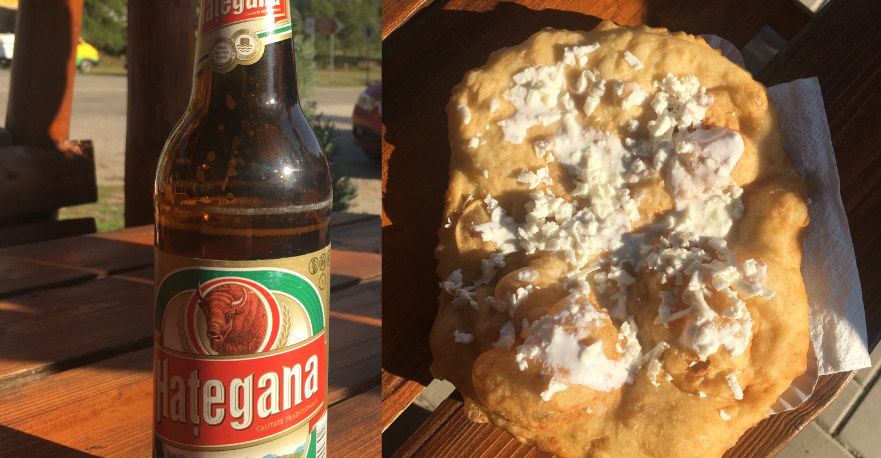 How were the Dacian people connected to the Native Americans I had spent last fall with? It seemed so obvious in a momentary flash that they were connected. Like walls falling down around me I could see clearly that once we move out of physicality the world of Spirit opens to reveal the deeper truths. But what was this message? I felt it in my body and in my soul that what I was hearing was a truth.

Our time here was to be very short so we opted for using the remaining light of the day to visit Sarmizegetusa. I am glad we did for by that hour the tour buses full of people were leaving and we found the site almost empty of human chatter. 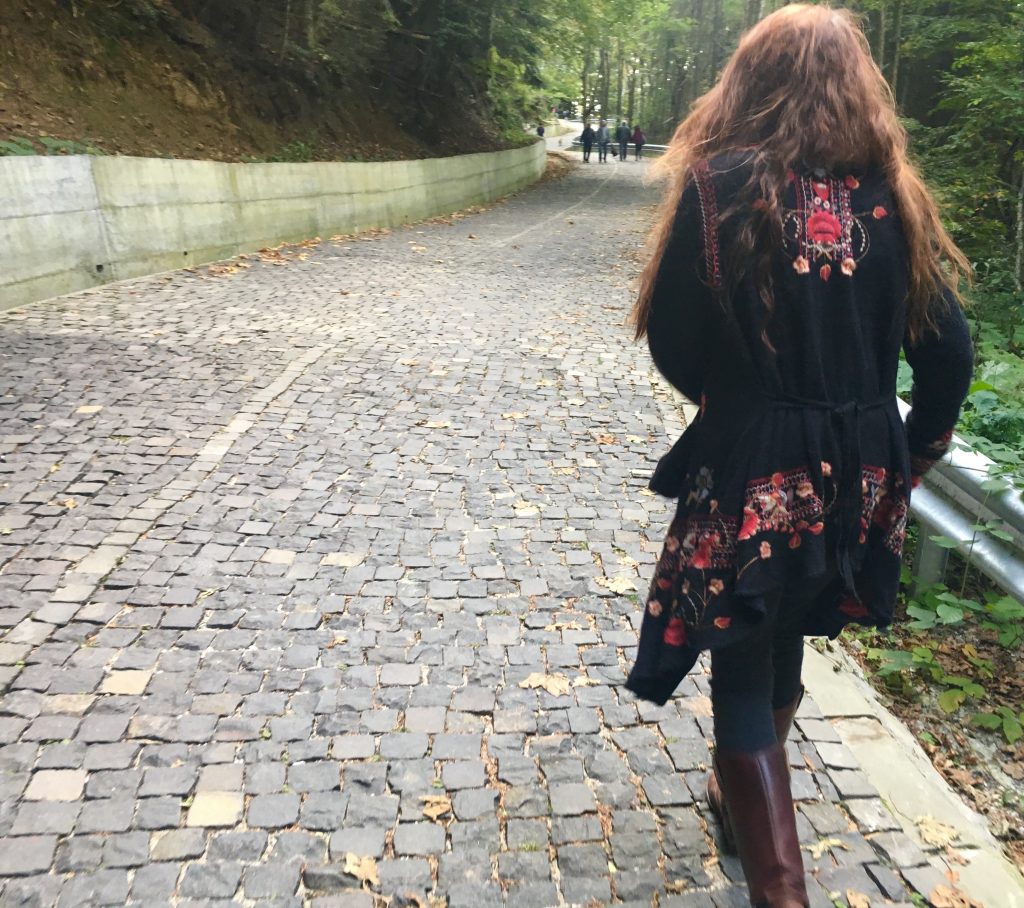 Christine walking the road up to Sarmizegetusa. 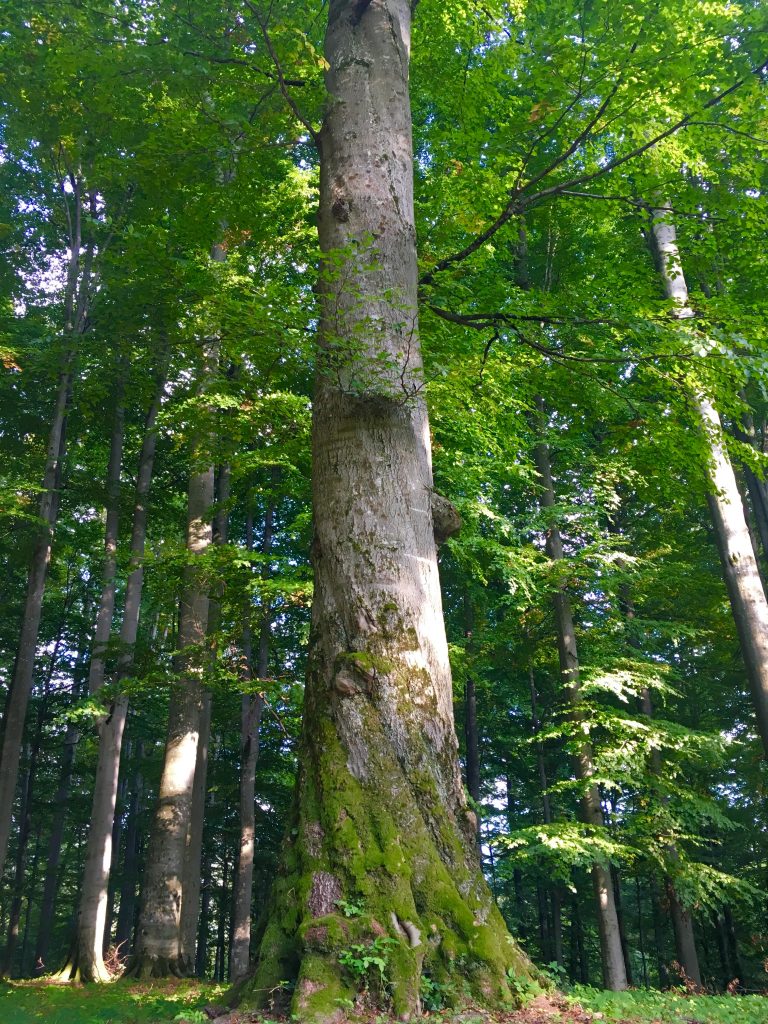 We meet a sacred grove us as we enter the site.

Mystery whispered in the branches of trees, these guardians of peace and knowledge. One must walk very quietly in this realm for it commands a respectful entry. I am drawn to this tree and am allowed to place my hand on her wide trunk. I instinctively did not want to disturb the field around her so I paid my respects and moved on. There is another woman close by, I sense her and we too commune in the silence of mutual knowing.

The main stone circle of Sarmizegetusa with reconstructed wood pillars.

The past is full here though not at all fully comprehended by our limited human perspective. It can be felt and intuited, I am knowing that what I am picking up with my internal antenna will be revealed with time. I can’t grab for it or try to confine it into any recorded history. The descriptive plaques give almost no clue as to the real importance of this site. Even the most studious scholars admit that the Dacians are a mystery. It took the Romans 400 years to conquer these fierce people and when they did they left almost no trace. The people were slaughtered or removed so very little can be found in the official records.

We walk the grounds quietly touching stones allowing them to speak. As with the trees there are lines of communication with all stones, the firmament or foundation of all that was and ever will be. I know this sounds fanciful however in the hour we spent here much was known. Portals to the stars, I perceive people materializing and dematerializing sensing that this is how we came to be here. I hear the voice again.

Inwardly knowing that this plane of creation contains the whole of creation. Touching stone I hear ancient songs that were sung, I see a golden light swirling in vortexes and wonder as to why this is called The Valley of the Golden Thrones, I wonder too of the connection with Egypt and of the stories of holographic chambers underground. My body resonates in knowing that the people who once inhabited this place were keepers of eons of time, guardians of sacred knowledge. Was this why they had to be so thoroughly destroyed? And what is this nefarious force that seeks to destroy? 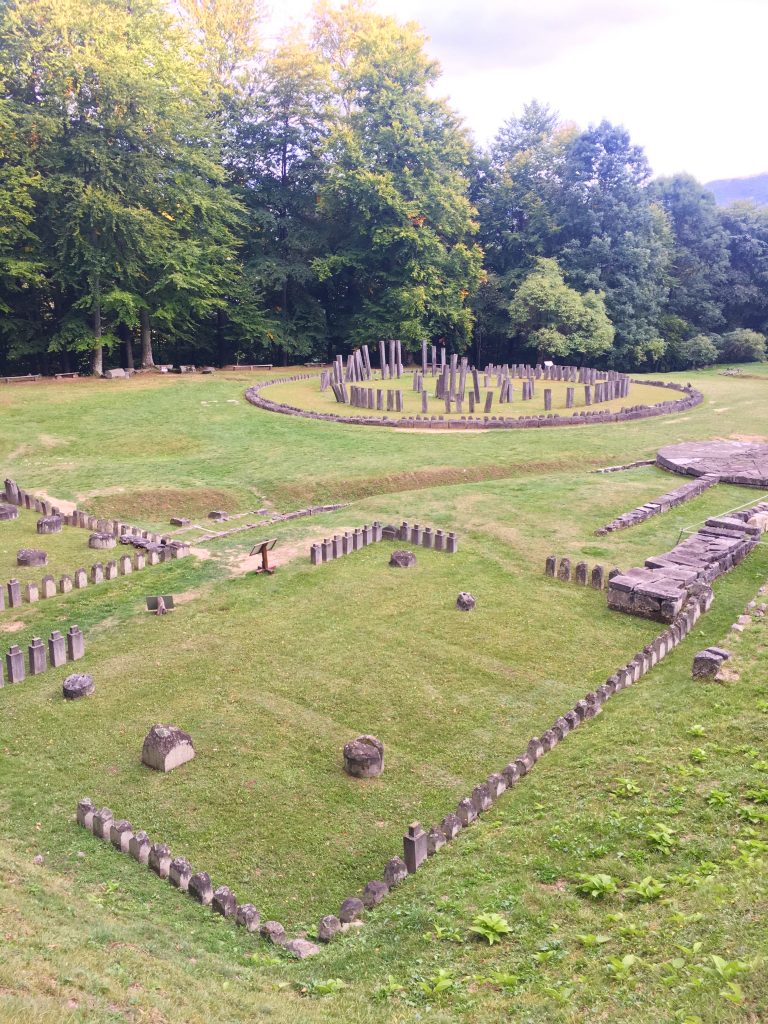 The layout of the circles and rectangles. This is the sacred area of the stronghold of the Dacian people. 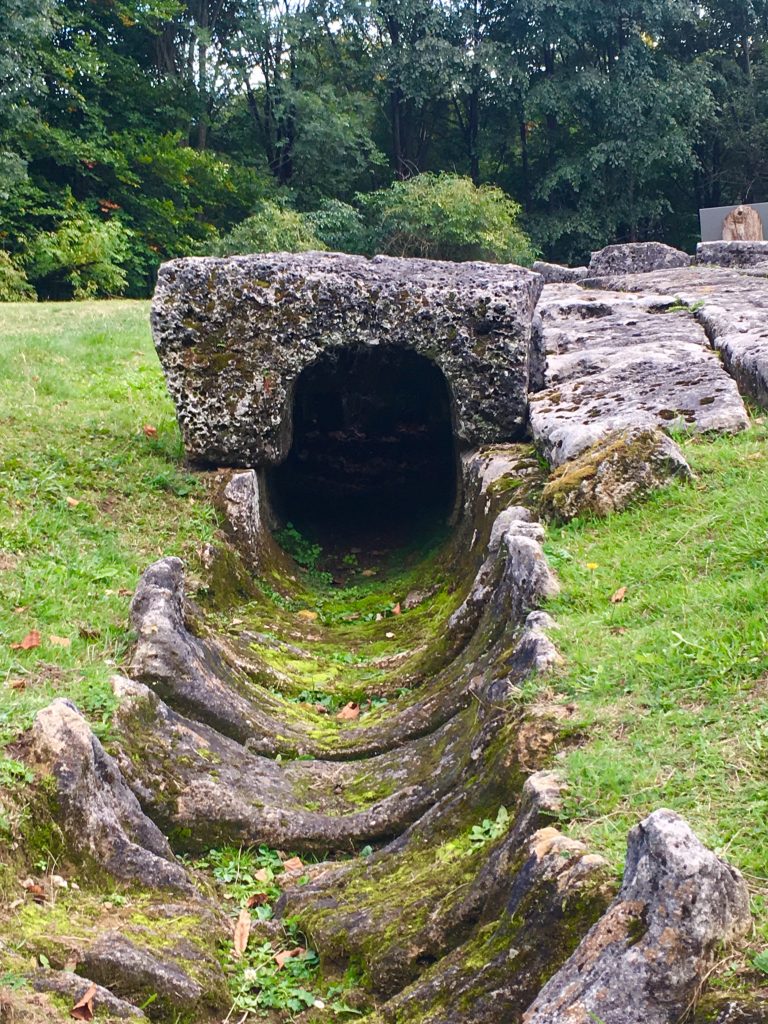 Stone lined water channel that runs through the sacred area. 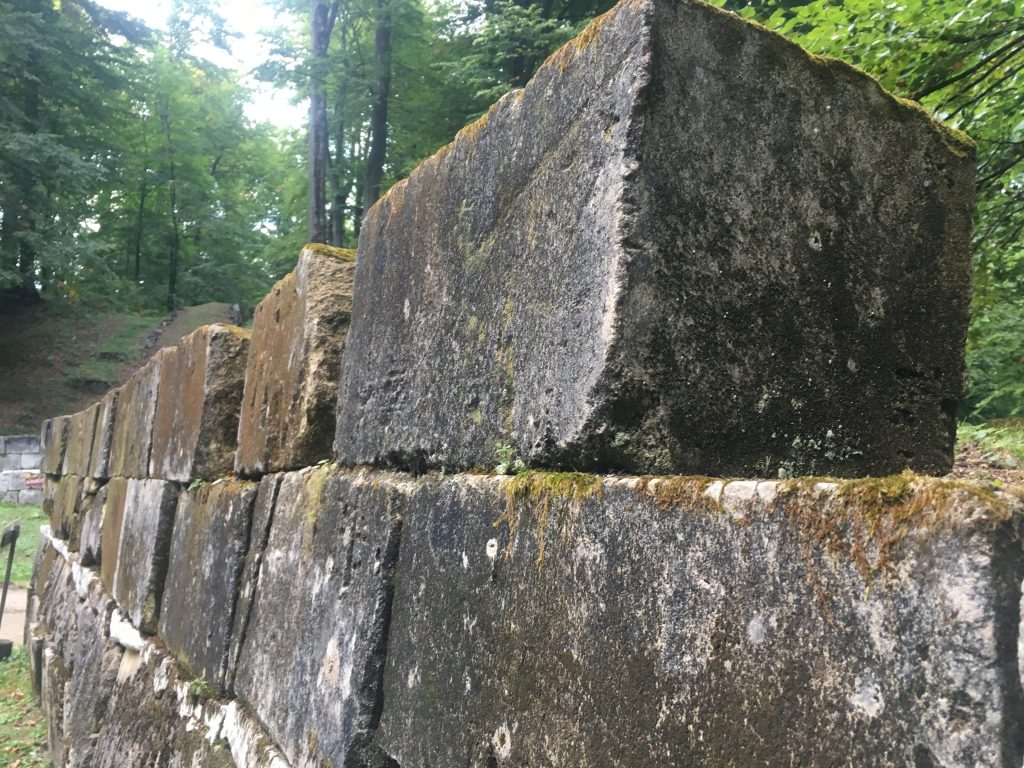 Remains of stone walls that once protected the Dacian stronghold, the ones seen on top were found buried and placed on top, the bottom stones are weathered by the over a thousand years that they were left exposed. 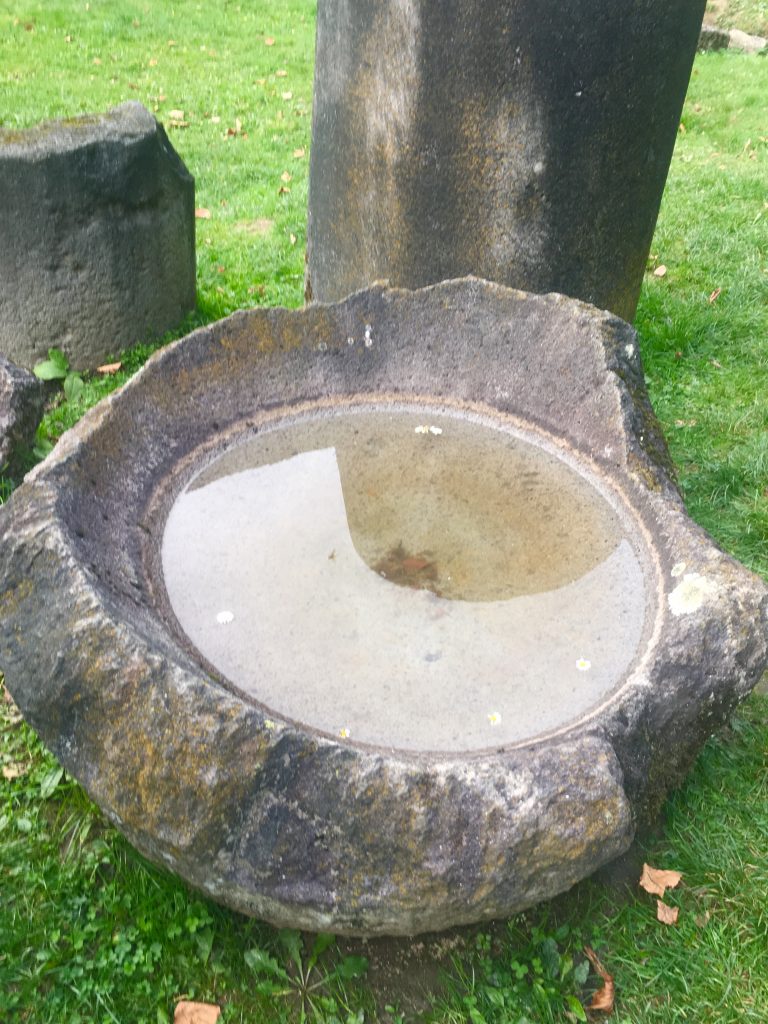 Stone bowl of rain water, no explanation for its use is written.

Neither of us speak much preferring to let our perceptions stay open, we know we will compare what is intuited later. It is better this way for language has a way of limiting us. We won’t stay too long for the sun is now setting and we know we have completed our visit. We walk hand in hand back to our vehicle happy for the experience and letting it sink in.

Half way back to our lodging I am hit by an energy wave that leaves me dizzy. I feel stripped bare of all my defenses receiving wave after wave of sorrow and with this creeps in fear. Will all be lost again? Will we be thrown back into the halls of forgetfulness? These fears surface and as they do my personal fears come forward too, I feel like weeping yet can’t. It is a long restless night for me as I surrender to what can’t be repelled knowing that sorrow holds keys too.

Early the next morning I go for a solitary walk, the ground is icy and the air silent. All I can hear is the sound of the creek that winds it way through the valley. In this I find solace and a return to some semblance of balance, the other world slips away and we have a long days drive ahead. 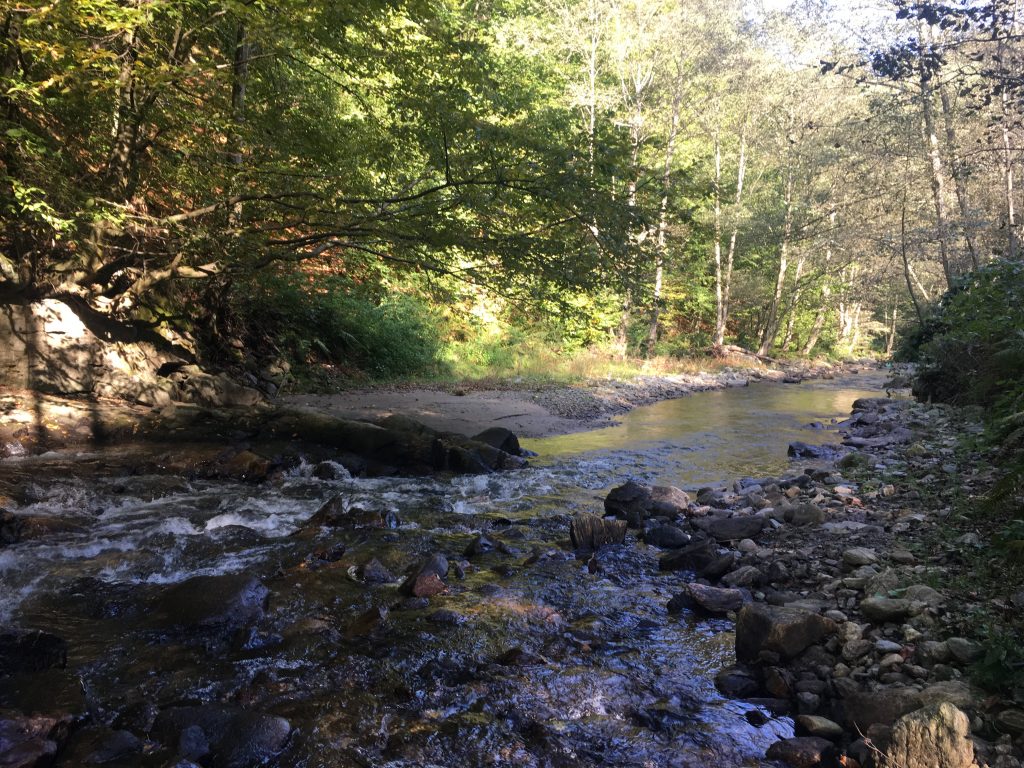 River in the morning light. 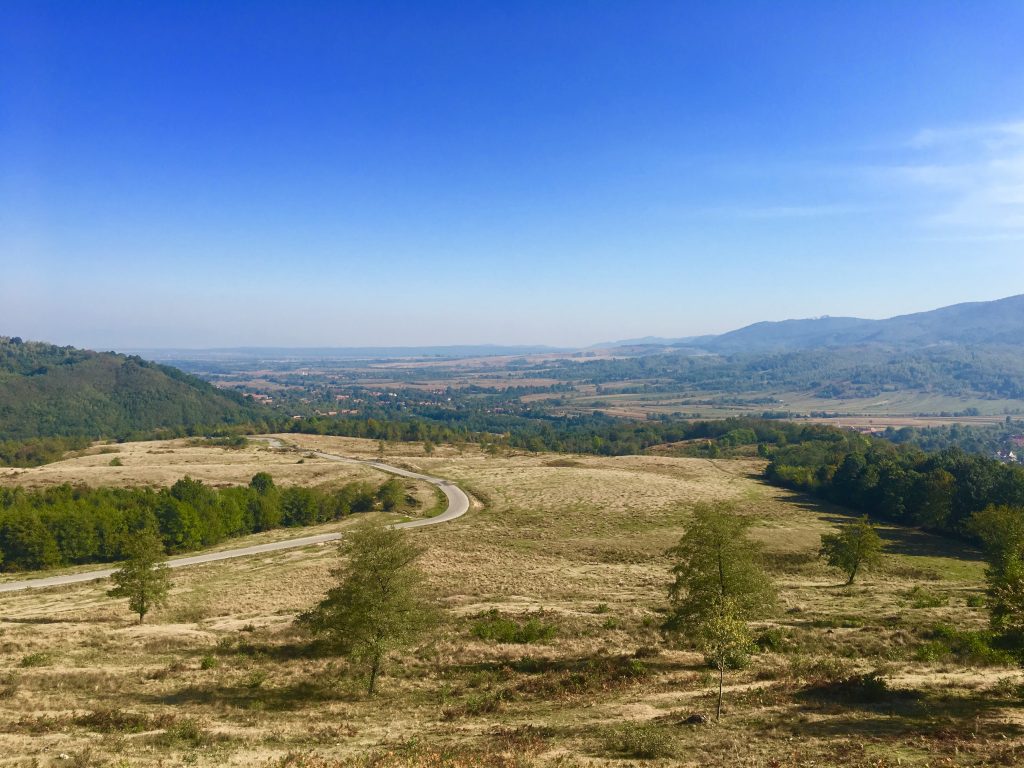 A final view of the Valley of the Golden Thrones.

“This is the firmament.”