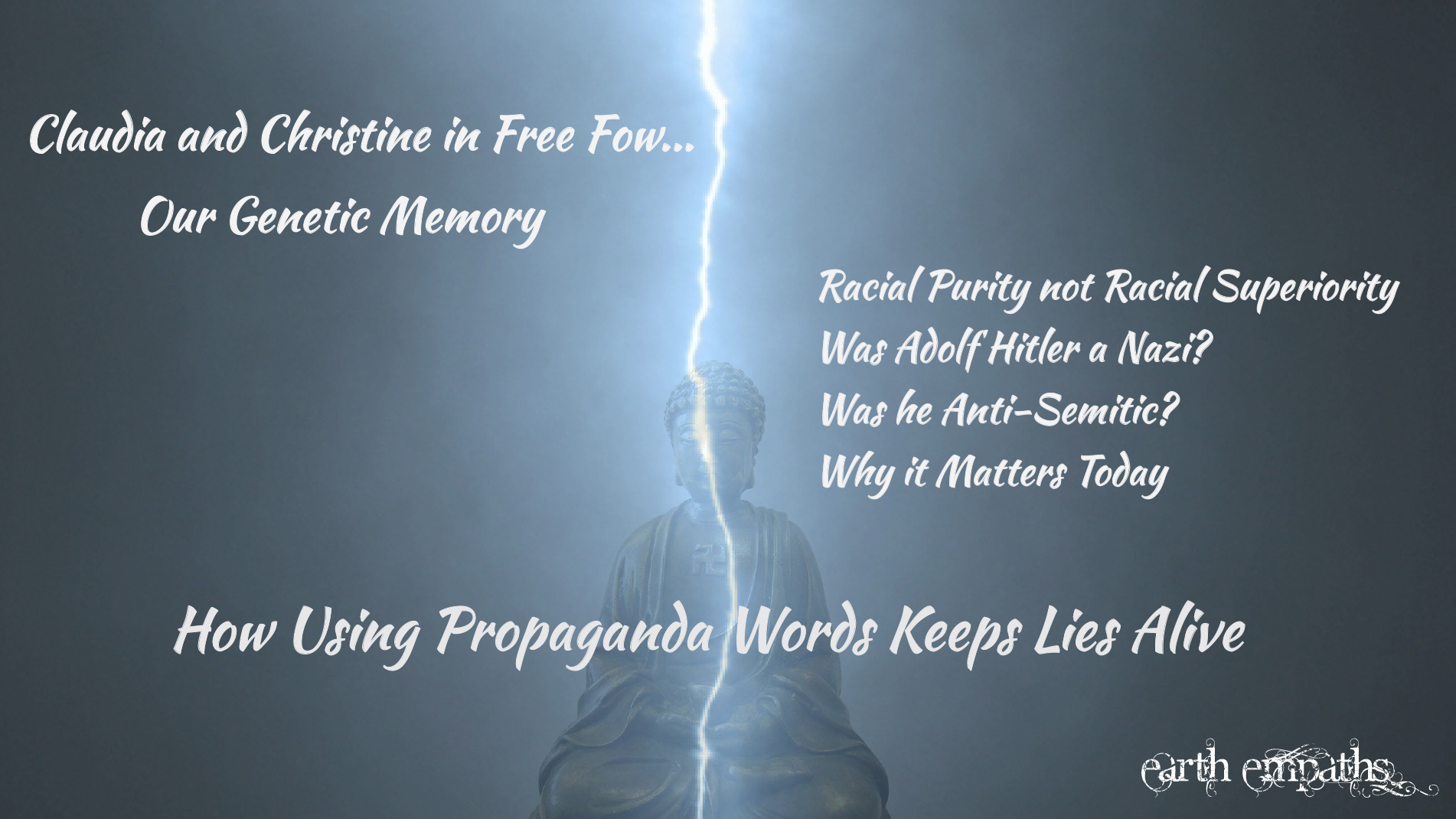 Most of our days are spent living LIFE as it truly is, a gift given for us to rejoice in. It is by no means easy to traverse this realm though it is a soul satisfying one as you allow the falsehoods to be stripped away. In these days maintaining the ability to find joy in this creation becomes the solace for the soul.

The predatory parasites, not the ruling “elite”, are the would be evil overlords who continue to perform the role they were created for. Will humanity wake up? This question haunts many minds and is one we can’t answer when we stay enmeshed in the deception and continual gaslighting. Only the neutral Observer will notice the subtle changes in the field, will hear a new chord in the aethers. Those who have come to a comprehension of the necessity to purify, those who strive to hold themselves upright in the truth of their divine being will have ears to hear and eyes to see.

Claudia and myself have long been aware of a great lie, the result of a near insurmountable amount of global propaganda fomented in the days leading up to WWII and through to the current day. We began our research together almost a decade ago, at first timidly feeling the push back from the collective psyche for this was a forbidden subject. And indeed it has proven to be the most tangled and twisted territory for a free mind to tread. How dare you question the narrative! Once another layer of blinders is removed it’s easy to see we are dealing with the same agenda today.

Today we find ourselves in a different environment, today there is an up welling in the hearts and minds of millions that the truth must be told. This is encouraging and yet discouraging at the same time. In the recording below we address how most of the truth speakers still use the term Nazi to describe the would be ruling class. They still use Adolf Hitler as the prime example of an evil man who hypnotized his people. Our view is distinctly different.

If you can open your mind, shed for a moment all you’ve been indoctrinated to believe, perhaps you’ll find our musings enlightening. It is time we stand for all Truth, no matter where it leads us. For truth and freedom come with great responsibility. As most know the googled internet is being purged of voices, documents and soon, even access.

In the beginning of this video I read something I spontaneously wrote the day prior. It arises in me that within the collective memory there is a recordance of a time when the Earth wasn’t plagued by wars, a time before the intruders arrived. So many are looking for the geographical location of Eden, perhaps the whole Realm was Eden.

“There is a difference between racial purity of bloodlines versus the false concepts of racial superiority. The propagandists are relentlessly trying to convince us that the white race is responsible for all evils and no one has been more maligned than Adolf Hitler. Our talk today is to open a door through which we invite our listeners to walk.

The words Nazi are Antisemitism are misrepresented and misunderstood. It is discouraging to hear so many use them with little comprehension of how they became embedded in our collective psyche. Much like the use of C.O.V.I.D in our current cycle they are code words, one could almost say spells or hexes on our ability to see clearly.

Many, if not most tribes attempted to keep their bloodlines pure. Reasons for this were; racial memory, traditions passed down, way of life preserved.

Christine recalls in her visions that the world was sung into existence, there existed a harmony in each geographical and a story or song line. So the people would sing their song and it would be passed to the next place who would add their song to the original lines and thus a place of great beauty arose.

The occasional mixing of bloodlines was permitted though surely it was consulted among the elders and both tribes before being allowed.  In our modern day view this seems archaic, even barbaric so we look upon it disparagingly without considering that there was great wisdom in such decisions.

When the pretenders / parasitic elements were introduced there started to be a dissonance, very small at first but it was noticed by the great seers. With the dissonance came little waves of fear and distrust which started spreading. Trying to locate the source of this dissonance there came distrust of neighbor and other… it was insidious how this spread, like a creeping miasma or shadow.

This fear of other reached a high screeching pitch during different epochs of our timelines. And blaming another for this evil became the focus of the inquisition, the church, the judges and other black robed types. The accusers became the authority on right and wrong as the masses clung to their home fires often terrified that they would have the steely finger pointed at them. How deeply embedded in our human psyche this is.

Perhaps a few remained who saw how this was done but their voices were seldom heard. Only on the invisible ethers blown by winds and carried by animal messengers or sung from the highest mountain tops was the Divine Spirit kept alive within the realm. If one listens deeply enough these songs are still heard.”

Video description: Many inner perceptions are difficult to put to words. Both Claudia and Christine have spent many years researching the Third Reich and the overwhelming propaganda that lies behind the word Nazi. This lie is so deeply embedded in the human psyche that it influences just about every single person’s perception. We invite you to simply listen and contemplate what we are sharing for it opens a forbidden door.

After recording this we both experienced the sudden jolt of realization that Truth is always simple, this has happened many times so it’s not new, though it needs to be realized again and again. The biggest lie we all have participated in is blaming another for the evil we see so clearly today, if one can stop that tendency and walk a straight line out of any sense of victimhood it becomes apparent that there is a parasitical element that has now infested all races.

In the words of Joseph Campbell on the importance of Genetic Memory: “What is it we are questing for? It is the fulfillment of that which is potential in each of us. Questing for it is not an ego trip; it is an adventure to bring into fulfillment your gift to the world, which is yourself. There is nothing you can do that’s more important than being fulfilled. You become a sign, you become a signal, transparent to transcendence; in this way you will find, live, become a realization of your own personal myth.”