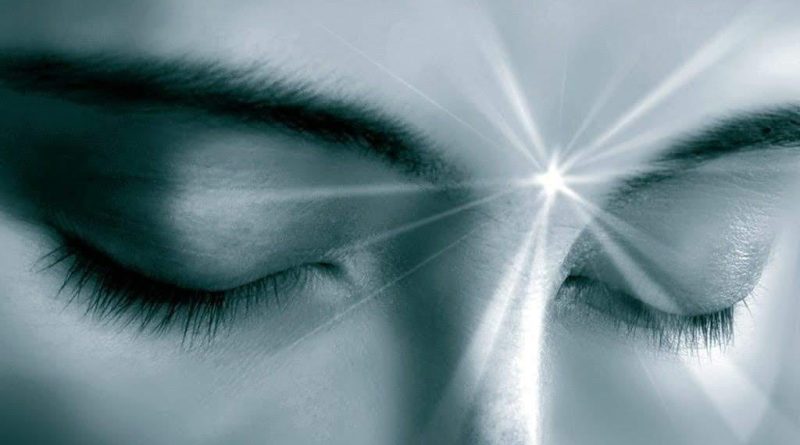 She circumspectly dips a foot into this stream not knowing whether she will fully take the plunge or linger on the shore left wondering in the morning mist. Somewhere between the night and dawn she was roused from a deep slumber though she didn’t fully awaken. From the crown of her head she felt a soft warm buzz so followed where it led her, upward her consciousness rose. Penetrating a thought, one not easy to hold on to, she explored the edges waiting for it to land into a discernible conscious pattern. Ultimately she had to translate the feelings experienced into congruent thoughts and somehow bring them to words.

Because what I perceived was not like anything I had ever contemplated I will leave it to the reader to decide on whether or not I tapped into a Higher Mind. Ultimately Gnosis is an experience, sublime and ineffable therefore not easily transcribed into the tangible—we are left with our human self experience to do so.

I found myself looking down from a great distance, floating somewhere above the plane of creation and seeing billions of souls floundering in their ignorance — chasing manufactured dreams. I intimately felt their thoughts, their self-sabotage, their mundane and often superficial lives. The all knowing Divine Creator felt each and every soul, knowing that they were endowed with sublime grace and intelligence and yet they knew it not. Feeling this I became overwhelmed with a great sorrow, for I also was seeing through their personalities to the heart of their souls which they knew not. There were those who struggled but dare not accept the light of their own being, others trapped in subconscious self loathing who would subvert themselves again and again. And the multitudes simply living and struggling to keep their bodies fed and some shelter over their heads.

I steadied myself in this place for but a short time, as I floated back to my body and waking consciousness I felt the terrible sorrow of our Creator, this is His Creation, we are His children and He loves us unconditionally, though can not do for us what we refuse to do for ourselves and each other. Imagine this for a moment, it’s not hard to do if you’ve ever been a parent to a child bent on self destruction and nothing you do makes any difference to the outcome. For we do live in a Natural-Cosmic Law universe, we were given free will and not even God can change the course of our choices. I often say to friends that only God knows the path of a soul, what it needs to experience to reach the gate of surrender and faith—this does not make being witness to suffering any easier.

I spent this past week in deep conversations having shared my experience with a few friends and with the ensuing discussion it was realized that the moment we transcribe such experiences into words much is lost and all is subject to misinterpretations and projections. For myself it is important that we recognize this for it overshadows all of our understanding on reading scripture and the written word of others. Due to the dual nature of the reality we are transiting, all is subject to our individual interpretation and often our interpolation. This is the difficult nut to crack, for how much is accepted simply because we believe or want to believe it is true?

Freedom, what is it? Freedom from tyrants, freedom from the construct, freedom from self imposed limits? There is a narrow pathway through a realm of duality. Speaking for my own being it requires a 360° view while maintaining the most down to earth grounded placement at the same moment. Often quoted is that one who can hold two opposing views at the same time has found the key to wisdom, paraphrasing here though I find this to be true. The requirement is acute awareness without judging the other, it’s time we stop attacking the actor and at the same time recognize the unsoundness or validity of an idea. Wickedness reveals itself swiftly when viewed with an expanded mind and an intact heart.

This is me postulating and questioning: Would The Creator be concerned with the redemption of the mass-murders, the bold faced liars, those who torture for pleasure, or the satanic ritual abusers? Are they are lost—their souls departed from the land of the living? In a free will universe have they already determined their final judgement by their acts? For myself I would say yes, this is how evil destroys itself, as it must.

Ultimately one comes to the realization that there is infinitely more not known that what is known. With so many folks questioning the nature of reality: the existence or non-existence of a Creator—not to mention which creator to believe in!, questioning whether we live in a simulation or not, the revealing of the falsification of history, the interjection of time loops, cataclysmic resets, the slipping into alternate realities, the overuse of CGI, the deep fakes, the ever present bots, and on and on it goes. There is an onslaught of contradicting data accompanied by the overwrought voices of idealogues, the internet interlopers, and influencers that are juxtaposed with truthers, researchers, and content creators which can definitely present a morass that brings one into a state of confusion, a labyrinth of sorts that if not navigated with a deeply sensed and trusted intuition will present as no way out.

For myself choosing faith became a logical choice. Faith in self, the little self that is like a drop of water in the great ocean of Creator and Creation. Or as often comes to mind, the self, within Self, within SELF. The ability to stand still with a quiet inner resonating truth, grounded in peace and connected to a vast field of all pervading intelligent love makes the only sense. Maintaining and stabilizing this state of Being becomes the prime directive which includes having faith that this choice is the magnetic force that directs the experiences and realizations my soul has longed for since the fall into duality.

Postscript: It’s taken me well over a week to compose this writing and during that time I experienced the sense of having everything I thought to be true stripped away, like it was zapped out of my consciousness. It was definitely disconcerting though at the same time I didn’t feel disoriented. Somehow I realized this was a preparation, for what though, I am not yet sure. Having grown weary of the voices of others, all I have taken in during these past years ended up in a blur so that nothing much interested me. There is another feeling that rose with this which was how necessary it was to simply trust and retain the smallest sense of being present. The yellow wild flowers swaying in the morning breeze are as grand as the stars sparkling in the heavens.

Perhaps if we listen attentively enough we can hear the original songs being sung back into creation.