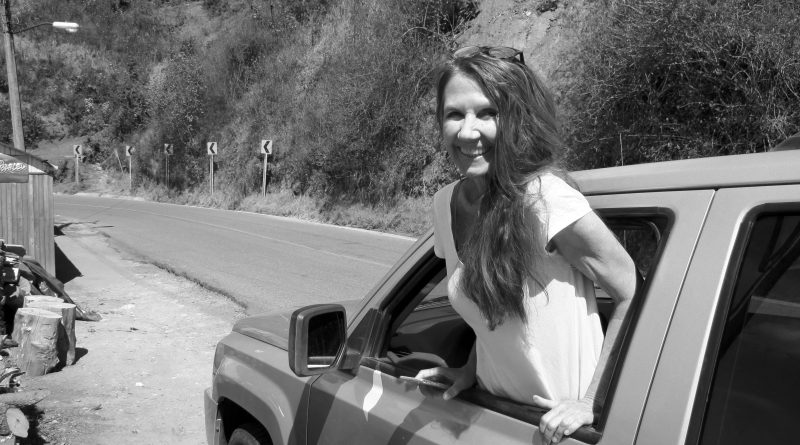 Back home from our travels through the southern states of Oaxaca and Chiapas we find ourselves in a deep contemplation on the a juxtaposition with the requirements of unnatural life. For the simplest things are the most enjoyable such as sitting on the earth as the sun sets and the crescent moon rises. Home now we gaze at the embers of our fire, the remembrance of ancient time when there were no clocks only the revolving stars overhead and the days marked by the rising and setting of our sun in one continuum of flowing motion like waves that come to shore. It is with a bitter sweet delight that we share our recent road trip. 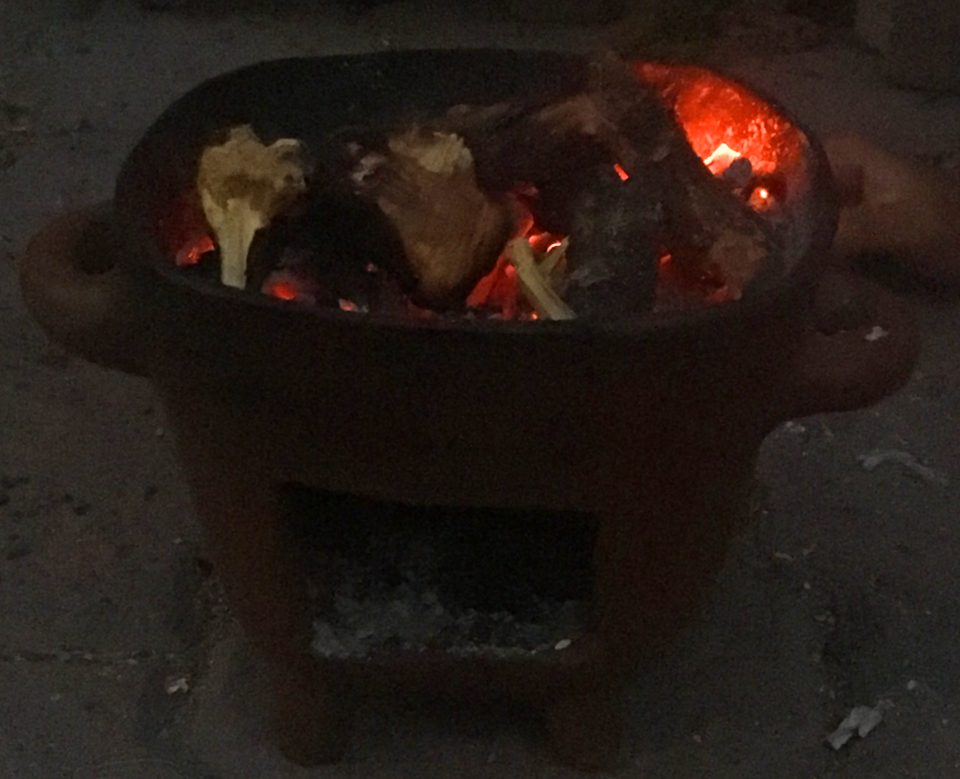 Embers in our Anafre, a clay cook stove we brought home.

The long winding road of our recent travels is a metaphor for a journey together that has taken us to surprising shores. We left early in the morning, our destination the Guatemalan border, long hours driving that took us from the high peaks of seemingly endless mountains down to the Pacific ocean and back again. 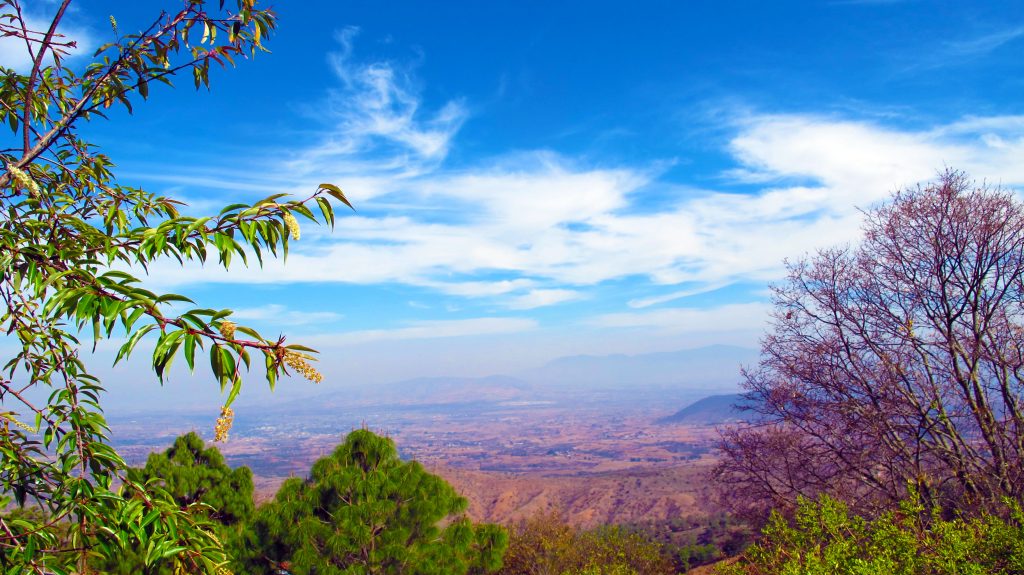 Mountains of Oaxaca, we drove for eight hours on a sinuous road to reach the Pacific Ocean. 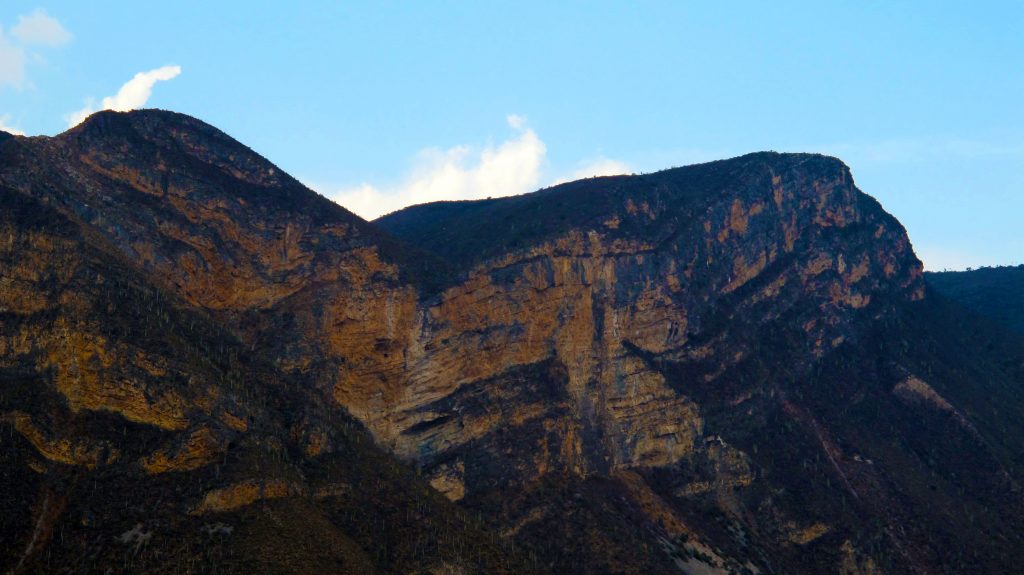 This land shares its primal power with us.

Every steep ascent brought with it the grandeur of a stunning view or we would come upon humble roadside establishments, for peppered along our route were rustic comedores, small shops of handcrafts and bright displays of regional food. Built hanging over cliff edges we couldn’t help but stop to take in the view or sample the food. Our first stop coming out of Oaxaca City after a night spent seeking refuge from  a torrential thunderstorm was to find this stand selling fire distilled mezcal, Las Pencas Hablan. Easily understood in Spanish it roughly translates to “the branches speak”, the penca of the Agave is the thick barrel like trunk that is used to distill mezcal and tequila, so if you drink enough you can hear the plant. We were offered generous samples early in the morning and will testify to the medicinal properties of a mezcal made from wild harvested Agave. Included in our morning fare were handmade corn tortillas, Oaxaca cheese and fresh eggs from the hens in the backyard. 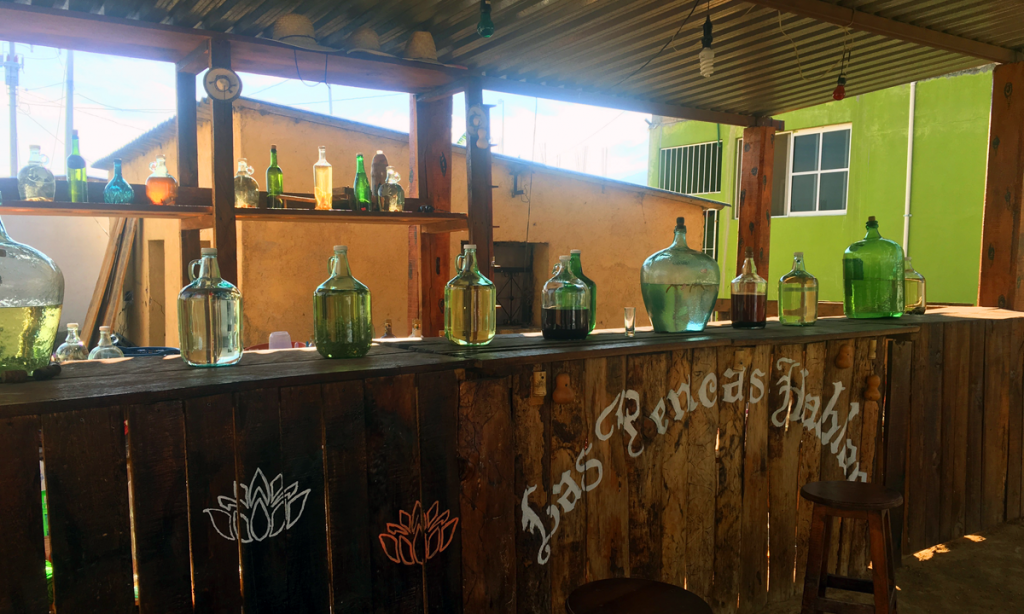 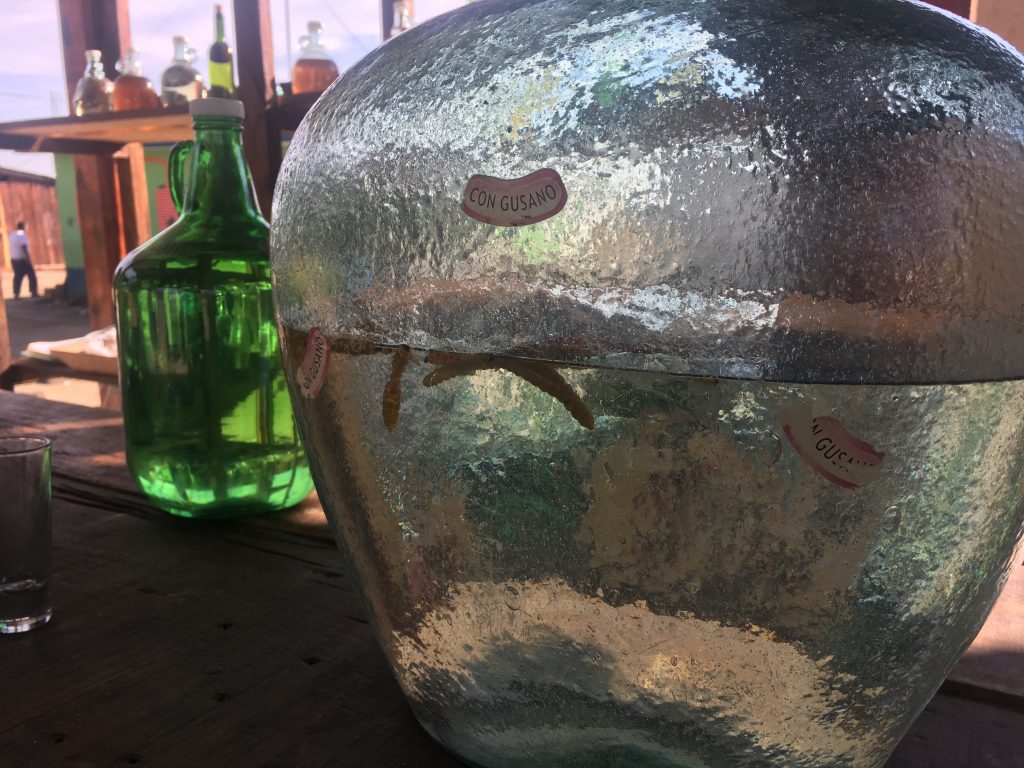 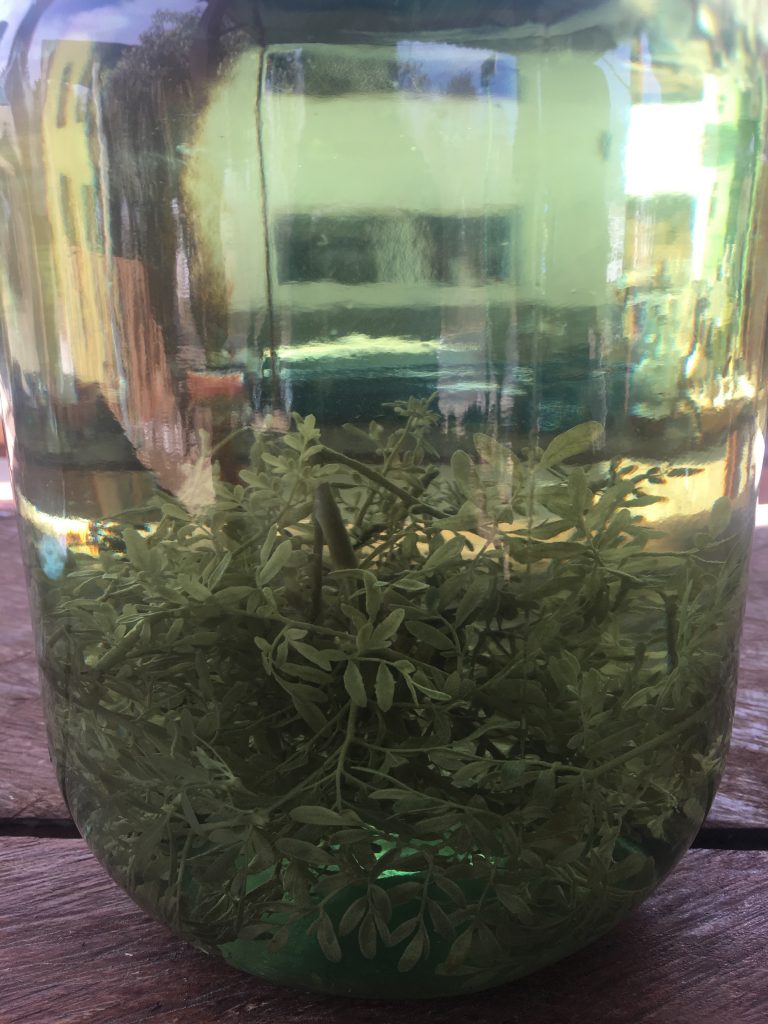 Mezcal with Rue, for aches and pains and stomach upsets.

Agave nativa, we purchased a bottle of mezcal made from this wild harvested plant. 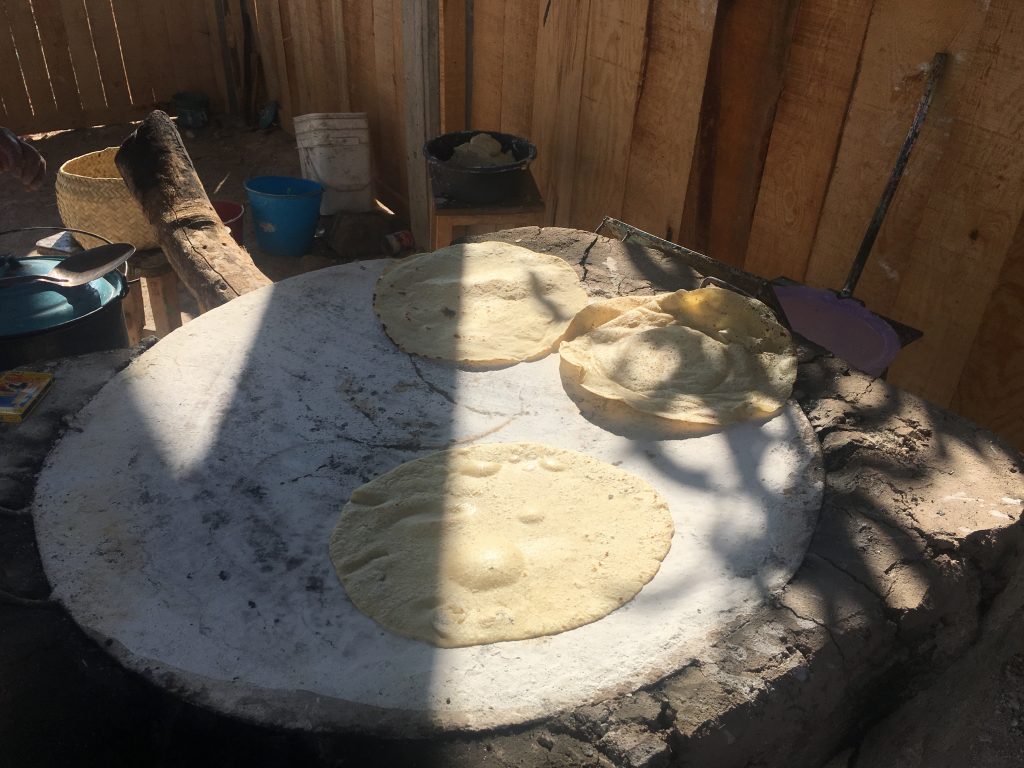 Handmade corn tortillas on comal, the best I’ve ever tasted. 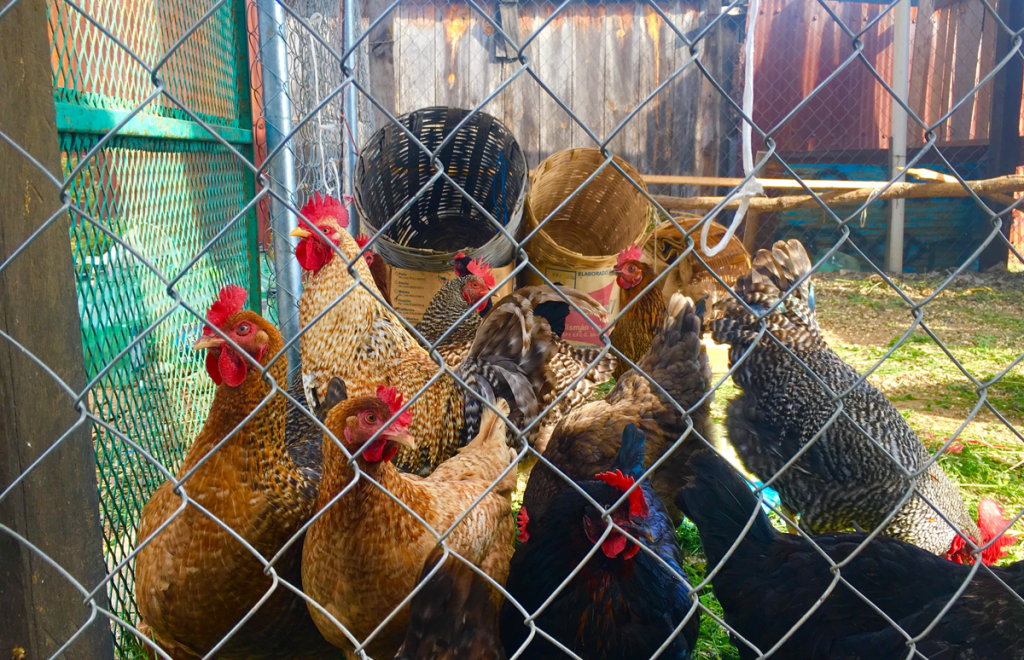 Hens who laid the eggs we had for breakfast.

Taking a road not traveled before is a journey of magic and trust. Our silent communion during long hours of winding up and down mountains was all we required to slip into a space of the expansive fulfilling self, the one that has lived immortally and knows that what we see is but a small part of what we are.  There exists within a sense of  trust that all is as it always has been. We could forget for a few days the compression of a world going mad in consumerism, deceit and war.

We wound our way through largely uninhabited landscapes of abundant splendor and when we came to a village the people lived as they have for centuries cultivating a small plot of land, tending their sheep, goats, burros and horses, most still attired in traditional clothing and selling the fruits of their labor to the passing tourists. We heart felt that not all is lost to the modern mind set on acquiring the fleeting happiness of convenience that offers nothing of the real in its fake promise.

Later that day at one of the highest mountain villages we stopped at a stand where we purchased some honey and local grown chocolate. Our hostess a young woman with a baby on her hip took us down a steep trail behind her stand to show us the coffee plants, cacao and banana trees. A harmony of color, scent and sound. 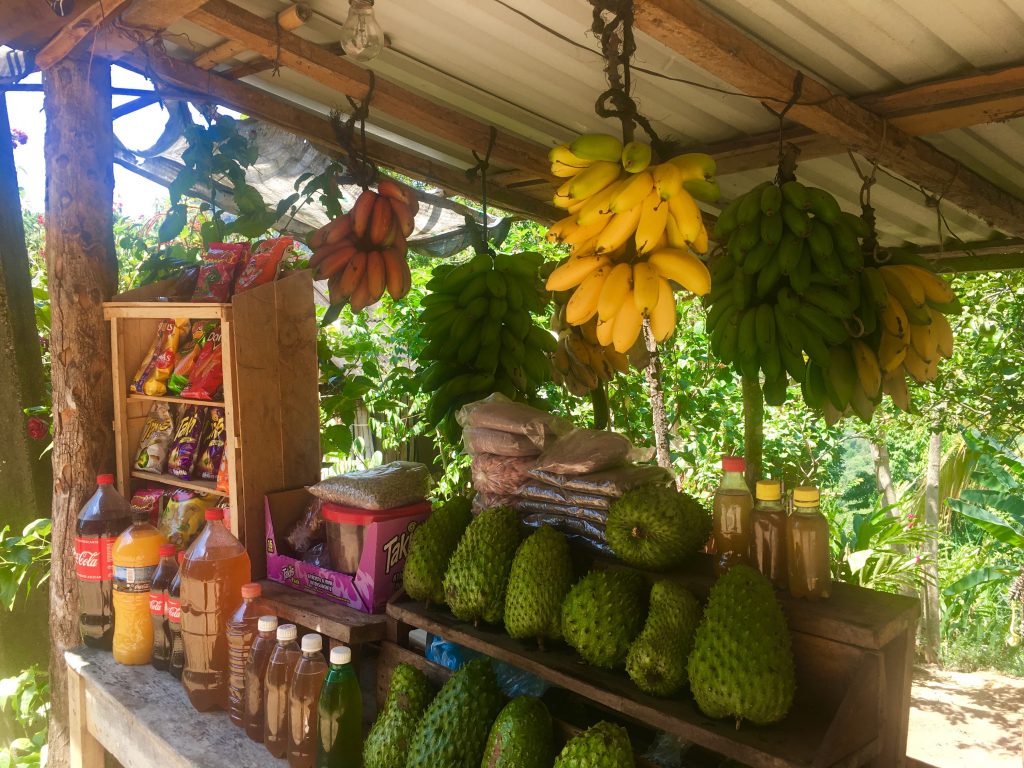 Guanabana, honey, chocolate and coffee oh my! The abundance of our Earth on display. 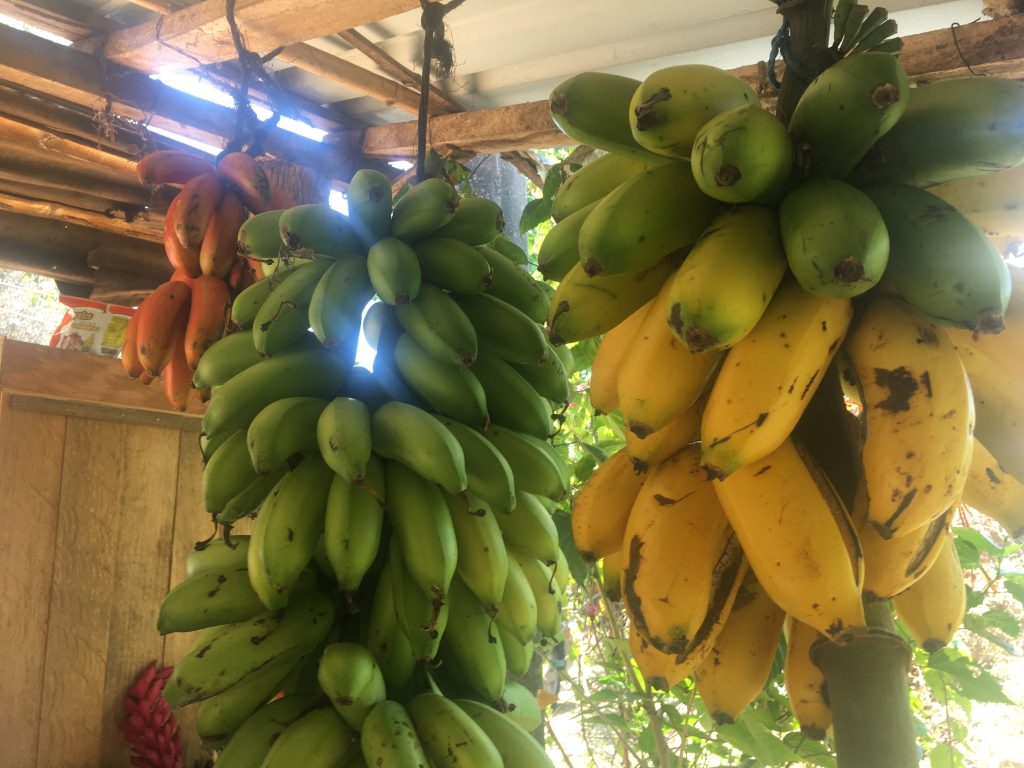 Bananas ripening in the sun.

Descending down the highway we stopped many times to snap photos and would have liked to linger though we wished to reach the ocean before nightfall.  Our last village stop was San Jose del Pacifico, truly a fairy tale land of enchantment. The Sierra Mazateca we drove through was once home to the famous curandera Maria Sabina. We had entered a realm of magic. 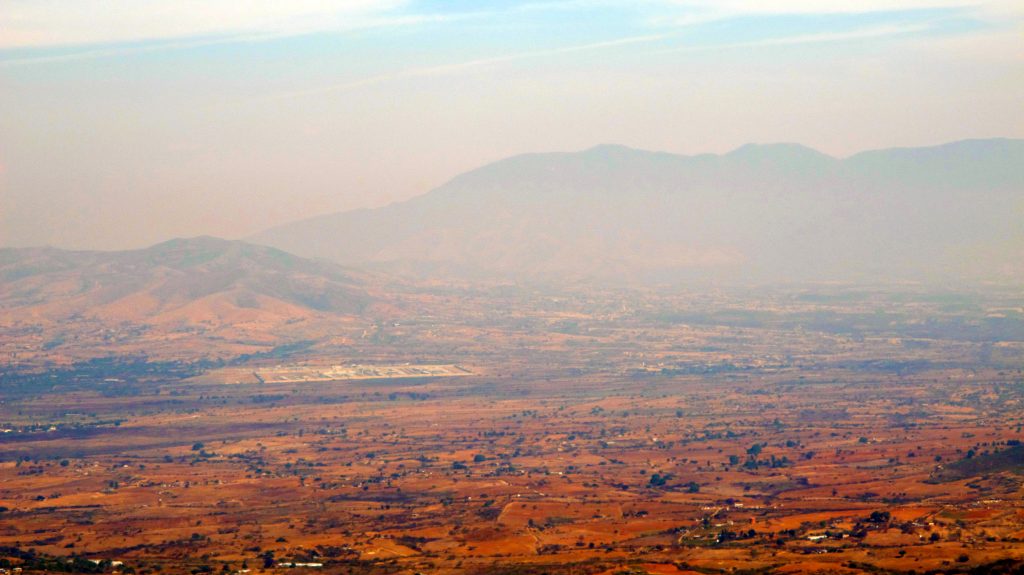 One of the many incredible views coming off the mountain top. 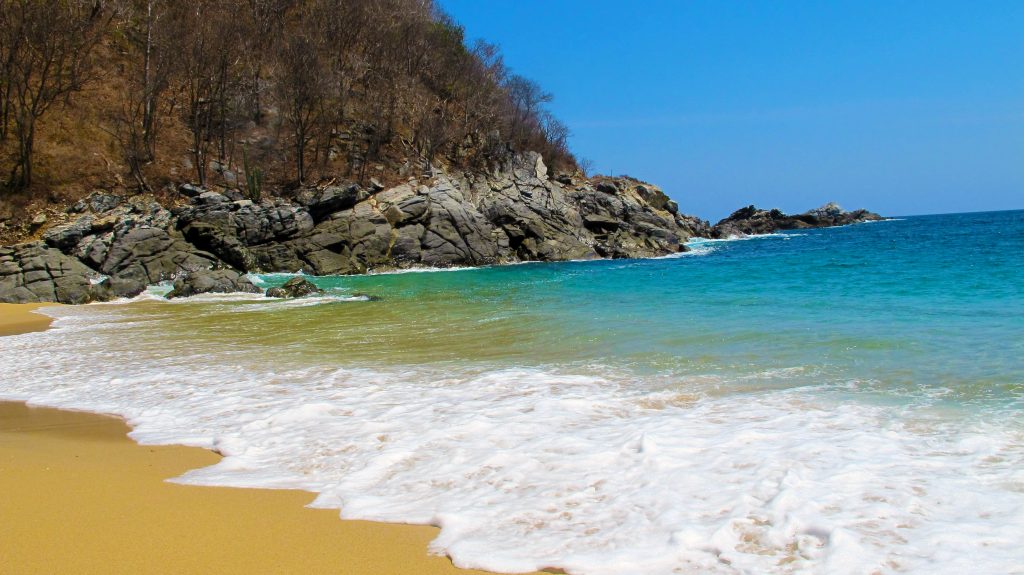 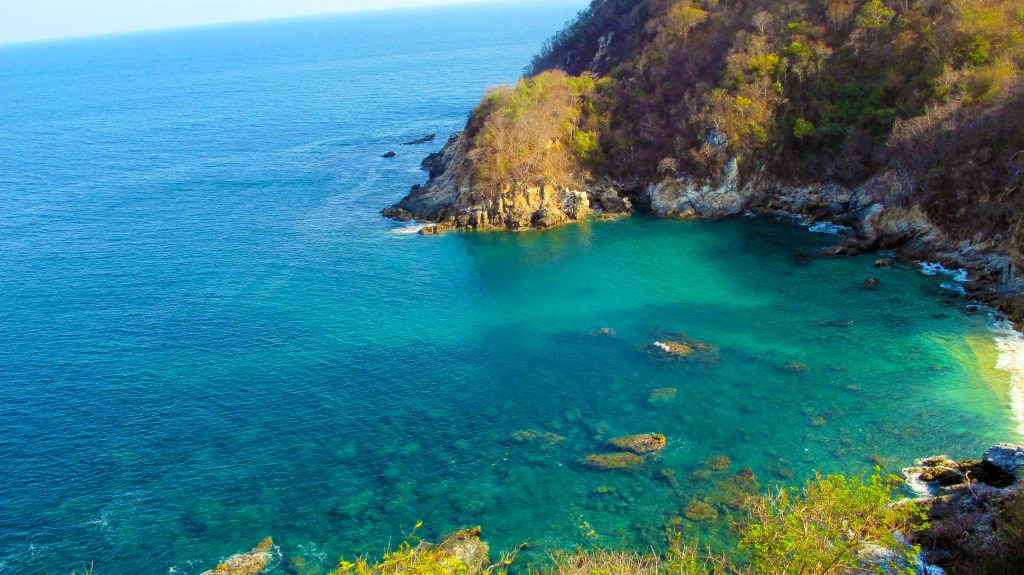 View north from the deck of the Palapa roof guest house we were graciously invited to stay in.

Sun warmed sand and ocean are all a girl needs to let the sensuality of nature permeate her being. 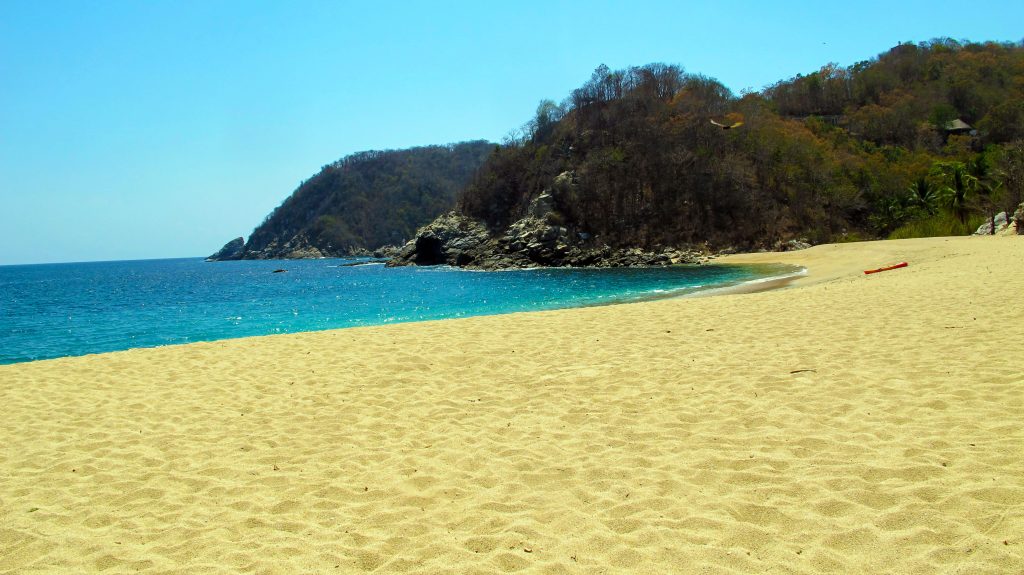 A kayak rests in the distance on the sandy beach at Bahía de la Luna.

The next day was spent on ocean kayaks that the small hotel provided us with. As we paddled out toward the open sea to get a better look at the shore line much to our delight we spotted a baby humpback whale frolicking in the distance. She surfaced a dozen times rolling over in the calm sea before disappearing. Humans have such a deep connection with mammalian life in the sea, spotting a whale is always a gift of joy.

Taking to the road again we said goodbye to our beloved ocean heading now for the highlands of Chiapas. We would have stayed longer but this trip was bound to be a short one pressed as we are by the looming specter of Semana Santa when hundreds of thousands of people take to the road headed for beaches and tourist locations throughout Mexico. And too we are unconsciously scouting for a place to return to as soon as outward focused duties let up and we can linger as long as we wish. 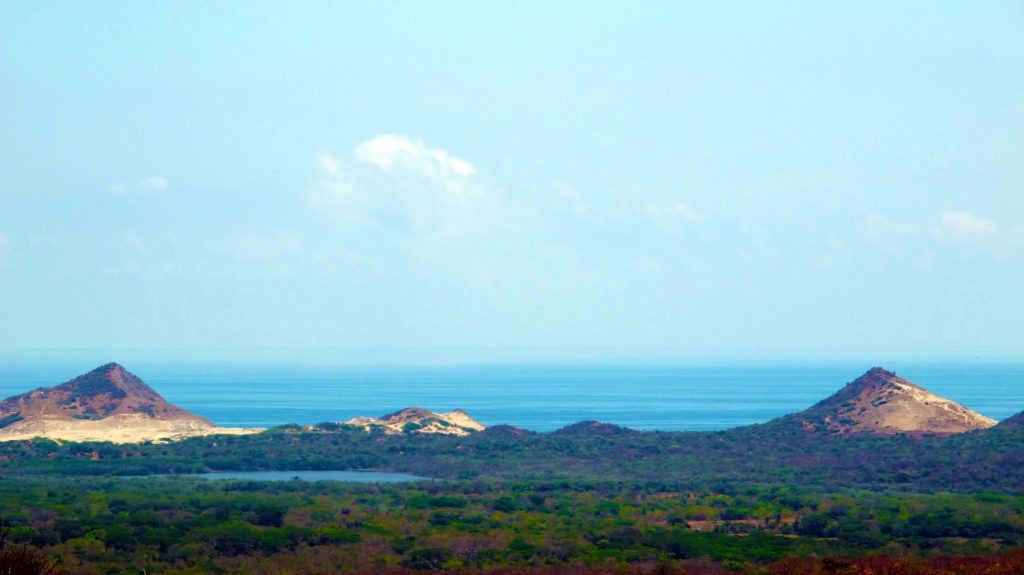 Last view of Pacific ocean before we turn eastward and head inland.

Topes or speed bumps as they are known in English are the saviors (lives saved from speeding cars) and the plague (wear and tear on auto and passenger) of driving the lesser used highways of México. We passed through dozens of towns and villages on our way toward San Cristobal de las Casas and every town or crossing has topes, reductores or vibradores entering and exiting, we lost count of the slow-down bump-bump of the tires going over these obstacles on a regular bases.

We aren’t much for planning or booking anything in advance so we found ourselves late afternoon wondering where we would camp for the night. A roadside stop for petrol and a WiFi signal gave us time for a quick internet search, the first place that popped up was Canto del Agua Ecolodge so off we went for with a name like Song of the Water we couldn’t resist. The drive was longer than we thought and many times we were left to wonder at how google maps decides on a route as we drove down narrow dirt roads, wound our way through a village to dead end streets though we did eventually arrive. Too late to set up our tent we were given a room for the night. Truly a place where the water sings as the hillside property is covered with tinkling steams and small water falls.

We thread our way down a steep path carrying our bags guided only by a flashlight until we come to this charming two floor cottage. We didn’t need words to express how fortunate we felt to have been led here by some inner compass that navigates on trust. 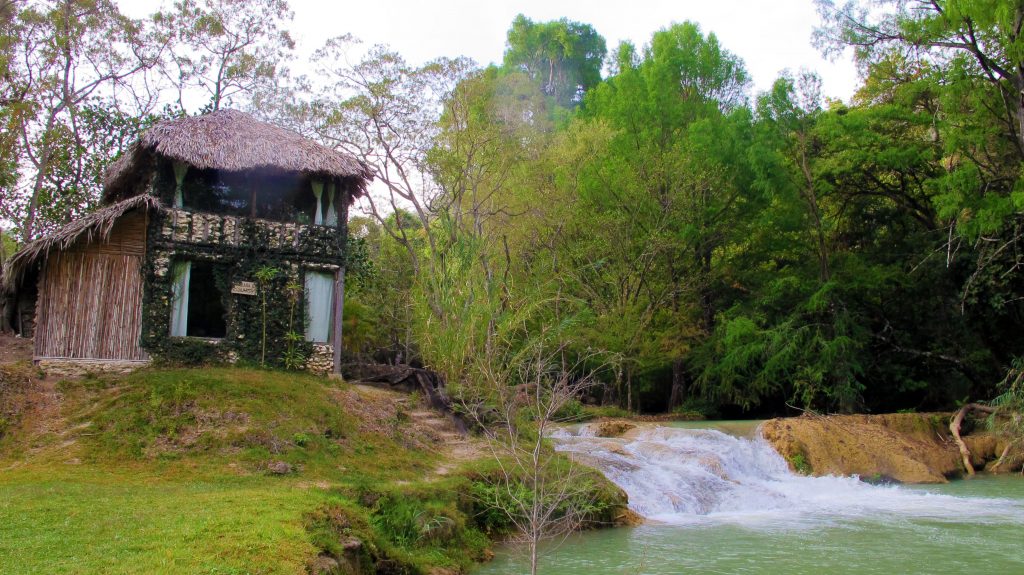 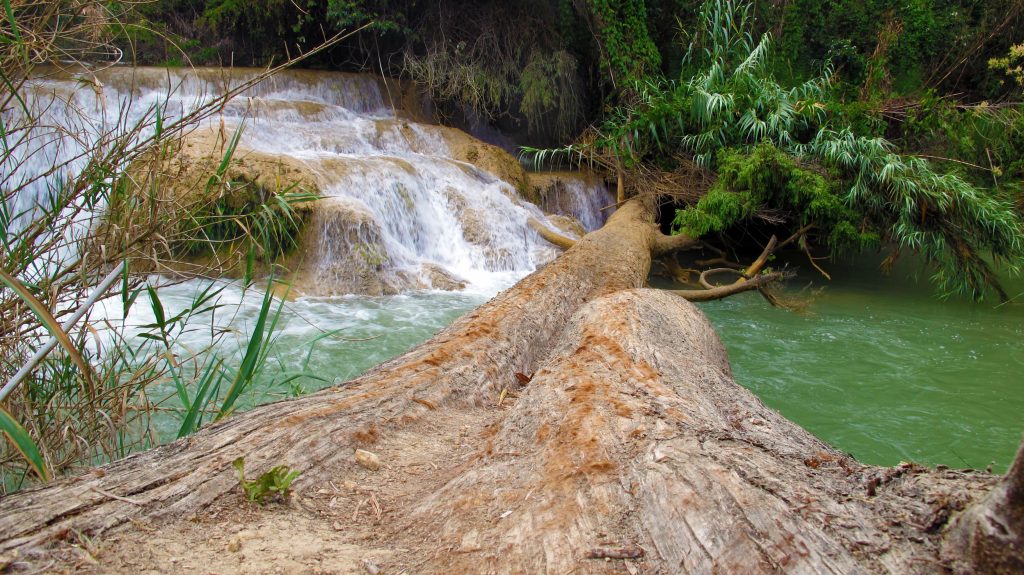 The water falls behind our cottage with log bridge crossing. 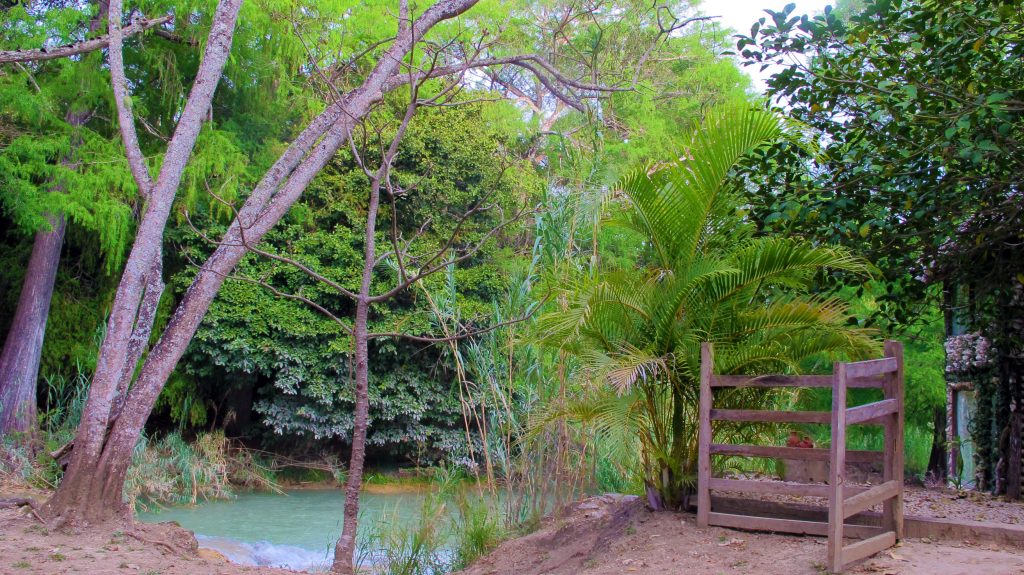 We slept deeply held in the lullaby of the river outside our window. Morning came early and the call of the road invited us to move on. A quick swim in the mountain cool water invigorated the start to our day. Dizzy from all the switch back roads and the murmur of the water we set out at a slow pace. 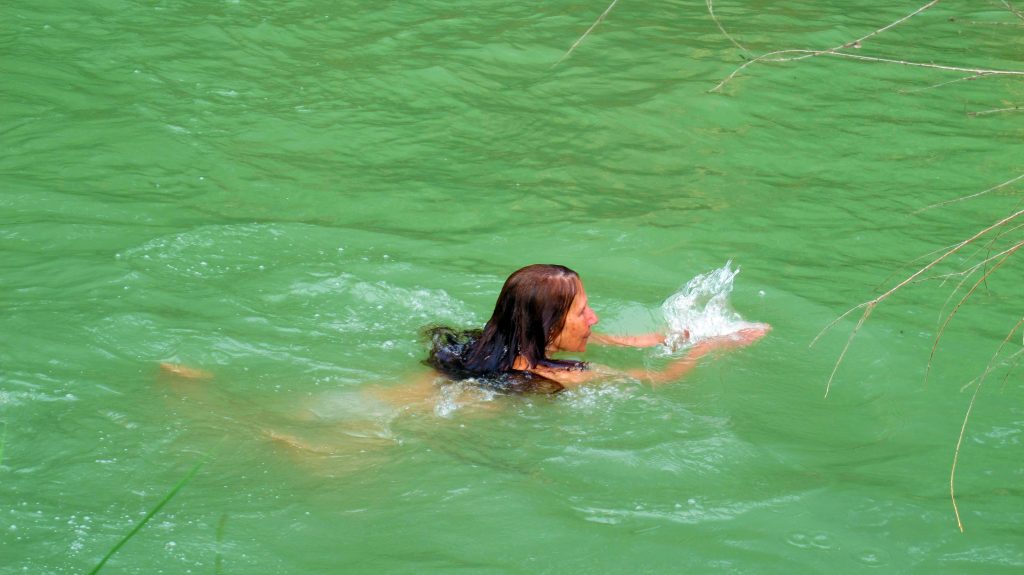 Cold water swim in the morning. 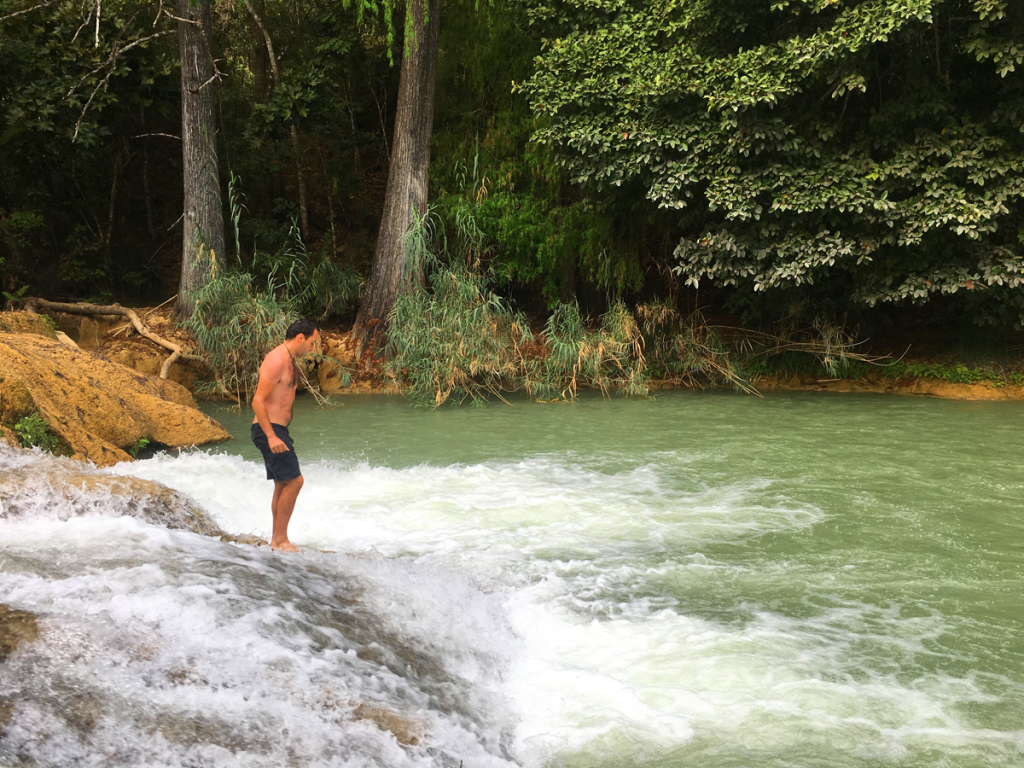 Cristian readies for the plunge.

We enter Guatemala later in the day to renew our visas and perhaps find a place to camp for a few nights though that is not to be. Guatemala is different than Mexico and we sense a dark cloud that hangs over this country. Poverty is noticeable and the overlay of evangelical Christianity is met at every turn of the road. Mexico felt clean and open, smiling faces and a rural life shone thorough everything. No trash on the roadsides or abandoned properties or people marred the scenery, as we drove through Guatemala this changed to piles of rubbish, abandoned vehicles and a people obviously in need.

There is something that neither of us can detach from completely and that is the knowledge of a world corrupted by the few who posses money and power. We ponder often on the way through this quagmire of deception and Guatemala reminded us acutely of how people who once held an intact tradition have been brutally suppressed then offered the false god of religion to replace the vitality of life lived simply and in harmony with the natural environment. These thoughts never fully leave us and our good fortune is often tinged with a bitter sweetness for the imposed losses on so many.

We decide to head home the next day. Our border crossing is not pleasant though we  manage to hold the silence of zen in dealing with the bureaucratic indifference of officialdom. We are able to renew our visas though we are told that we are committing some infraction for not staying out of the country for long enough, the system we are told is what determines this. The woman who stamps our passports does so with an air of imposing authority and she forgets to smile. 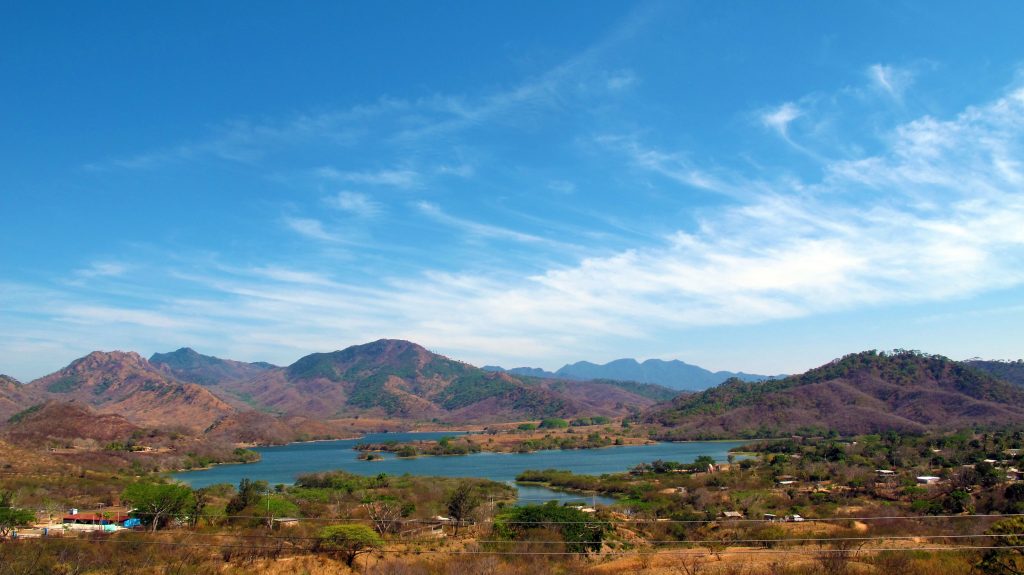 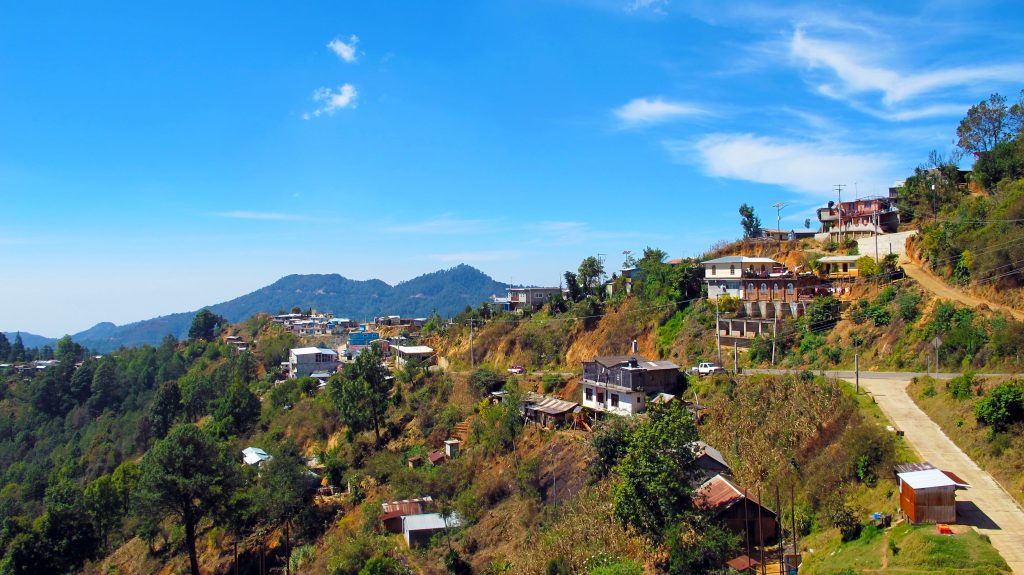 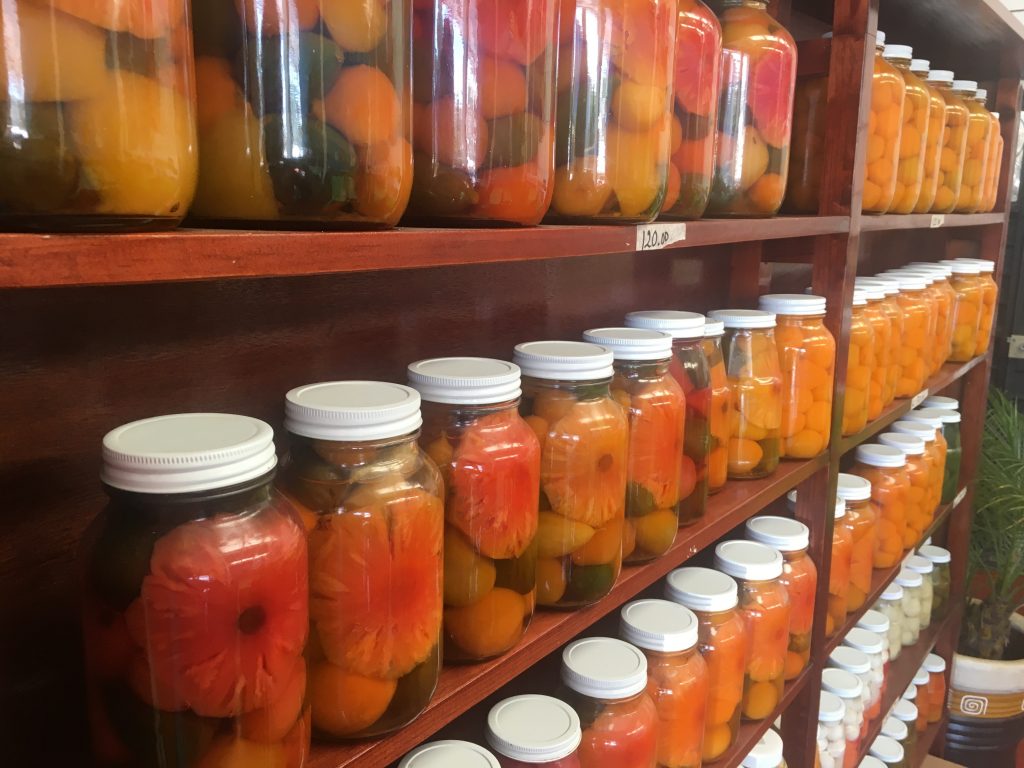 Jars of peaches, figs, and pineapple line the shops where we stop to break fast.

There will be more journeys in our future as this one comes to its end. We decide to travel through the night to arrive home and resume our work here. Endurance is the key word for the day as we only stop to fuel our vehicle or grab a quick bite to eat. We drive for over 15 hours, Cristian has done the majority of the driving but I take the wheel toward the end coming down the steeply descending pass from Orizaba, Veracruz into Puebla where we hit heavy fog on a crowded truck laden highway, the intensity of the focus keeps me awake into the late night. 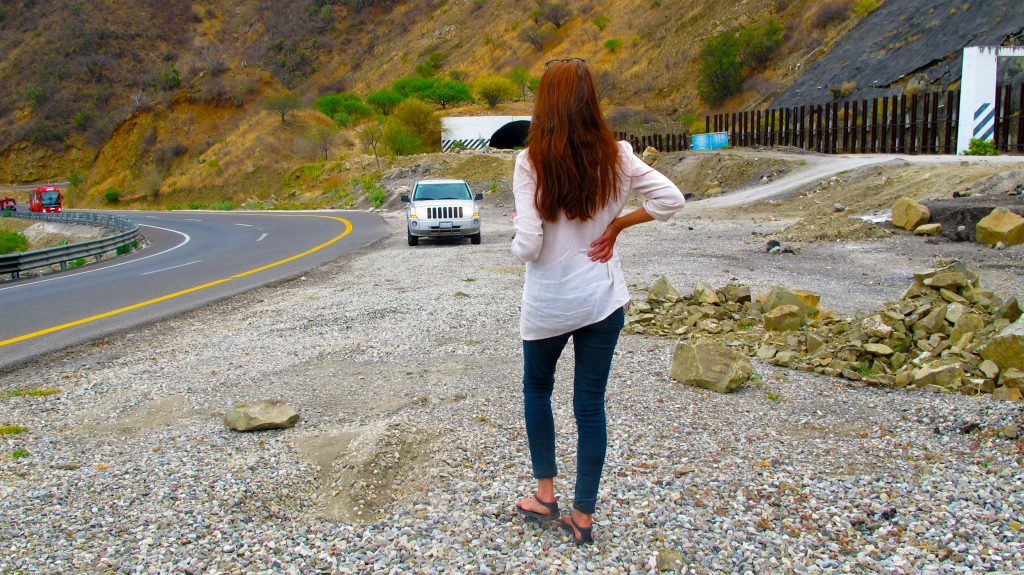 Christine contemplating the road behind anticipating what lays ahead.

We live a most blessed life which we express in the flows of gratitude. This time out we commented many times on the power of trust that acts in our lives in the most subtle ways. It is the voice within that so often gets silenced by loud demands. Listening is a life style of living in the real …

“No valid plans for the future can be made by those who have no capacity for living now.” 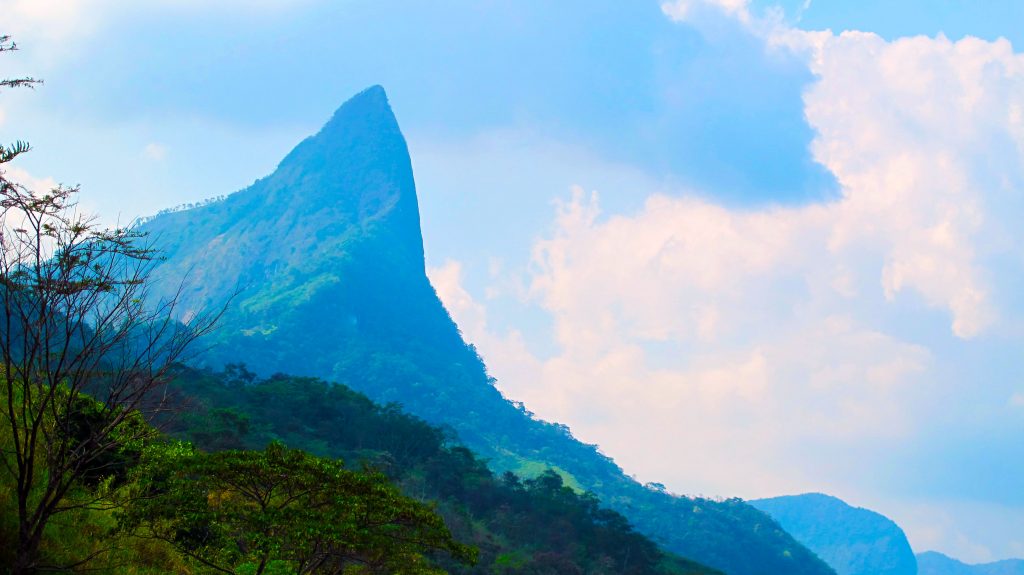 Dragon Peak, thus named for its radiance of primal power that had me jumping out of our Jeep and thereby breaking the screen of my iPhone as it was flung to the ground. The miracle is that it still works, well sort of.