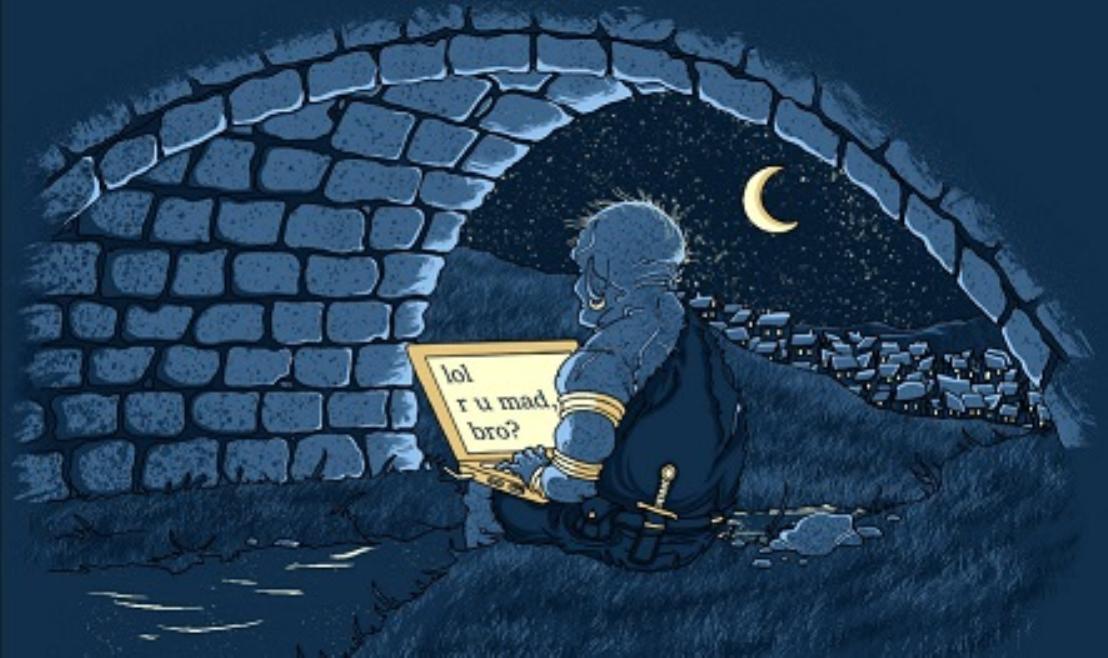 Sometimes the silence goes so deep that nothing can be heard rising above the clamor of dissonant drums beating for war; fear and death they pound uninterrupted… So she listens, feels the dark heavy miasma wrapping around her container of Joy. Somewhere she detects a light in the growing darkness. A tear slides quietly unobserved from her eye.

Tormented, twisted, and empty souls clamoring to be released from their misery. They screech on the pages of the virtual world, with disjointed words that spew their inner despair. She wanted to condemn them, she was so aghast by the pure hatred in their hearts, she felt their collective psychic wanting to envelop her, drag her into a sense of hopelessness. She sat, she felt, she listened until she saw one soul spark in the darkness and so she loved them all.

My muse also has a sense of mirth in the face of such heavy tides, she knows that to laugh is Divine.

This a a response after my conversation with Max Igan. I know about trolls, government troll farms, shills and those who get off by shit posting. I’ve seen them for years in action, even had a four year stint as a moderator on a hot topic forum run by a man who kept himself in the public eye by stirring controversy. When I stopped making videos, stopped writing, it was to stay quiet enough to assess and integrate the fullest big picture of the death cult’s agenda. I didn’t wish to add any noise to the chaos that was accelerating at warp speed. So these haters were but a slight nuisance easily shut out or swatted away like a mosquito buzzing around my head. Today my inner muse decides that a response is called forth.

Trolls: These creatures exist to derail conversations and to spread doubt or fear. They can be paid by government agencies, and there are the well known troll farms too, where some are assigned to track certain people with large followings. Their job is to spread false information, trolls can have many different online identities and are recognizable because they don’t put out any content of their own. They are hollow vessels with an unsavory energy.

Shills: Traditionally this referred to someone who helped another person to persuade people to buy something. Today it is used to denote anyone who is persuading someone they are other than they truly are, they act as gatekeepers and usually receive compensation from their handlers. They are often gatekeepers that misdirect attention away from the inner citadel of the real controllers. If they have a large enough following themselves, they can conceivably lead people far astray. Some are aware of their role, others are easily taken over due to the sorry state of their internal landscape. And some are still naive to the way the devious ones work.

Shit Posters:  Usually unhappy and envious people who find no purpose in their lives so they get off on posting comments that are mean, often vicious and when countered they disappear. Another characteristic is that they often make exaggerated claims of self importance due to the fact that they depend on the outside world to affirm them; when they lose followers, or accolades they often turn on whoever they see as a threat.

Victim Consciousness:  People who have either been traumatized or were brought up in a household, religion, or culture that promotes their victimhood. It is so ingrained in their persona that they feel they are nothing without it. It is the most disempowering place to come from, for it always blames someone else for their woes.

Savior Programming:  So well programmed into people via religions, cults, new age movements, group think, ideologies, etc. that it leaves people, once again, disempowered. By following any of the above tenants they are not taking responsibility for their own lives, they believe that their beliefs will save them. A belief is an attitude that something is the case, or that some proposition about the world is true In epistemology, philosophers use the term “belief” to refer to attitudes about the world which can be either true or false.

False Righteousness:  A particularly nasty trait. It assumes a moral superiority and therefore will attack anyone who doesn’t speak in the language of a specified religion, world perspective or ideology. One of the worst examples are the so called Christians who slander, defame and hurl hurtful desires at someone who doesn’t say things the way they deem to be correct. It is a sad state of being to say you are a follower of Christ and yet have zero recognition of His Work, possess no moral compass of your own and arrogantly pat yourself on the back for being a bitter and hateful person.

In summation, whatever category or categories someone might fit into, they are all participating in a clearly negative frame of mind, which translates to the fact that they are pulling down human consciousness, scaring others away from standing up, and draining the very light of their soul to do the work of the devil. I will just use that word; it could be Satan, Ahriman, the Demiurge, or even Xenu. The truth is, that it is their own shadow doing the work no matter the excuses they make for doing such. Some do it for money, some for the sick glee of hurting others, some simply because they are too bored with life, too emptied of being a positive influence that the dark hand uses them at will.

Incoherent thoughts and incomplete sentences are meaningless, stones thrown that miss their mark but disturb a peaceful field. I now realize why I write in complete sentences, taking time to use the correct word that still resonates with meaning. Unless you have a soul communion with another being, words are the means in which we communicate, so care and focus are the only manner in which to bring about the possibility of more complete expression. I often see where someone is coming from, perceiving through their persona are wounds, traumas and a resentfulness toward life that obscures the lens of possibility. Any one of us can see this, sense it, even the most positive Pollyanna type has this ability. When seen, the dark aspects, the inner demons, the entities that attach know they have been spotted, even when the carrier of such is unaware. These unacknowledged entities will either provoke a reaction such as an ad hominem attack, an outburst of anger or cause the person to go into blank stare mode — you can see this in their eyes. Sitting with these reactions, not reacting in any way literally opens a space for something new to come in, it might simply be a glitter of light, it could be a helping hand that reaches out from unexpected places. When I say that these changes are observational and verifiable, it is because I have experienced  how they work. They don’t necessarily manifest on my timeline, nor in any manner or way I could have even guessed, but they do change the vibrational field. For to truly love another as yourself, it is the ground on which miracles grow.

In the end Love is the only thing that remains, it is always seeking you. A moral compass due North will keep your ship on an even keel even in a big storm. Standing in the stillness of your truth everything else will move around you. Due North is upright, always aligned with Source (or god, or higher mind or whatever name you call Great Creator). For myself it is Source, the uninterrupted stream from the very fountain of Life.

My words are meant to inspire, for knowing is a State of Being; it can’t be given to anyone else though it can be transferred through the Aethers, for those who are ready, it will touch them with the hand of Grace.