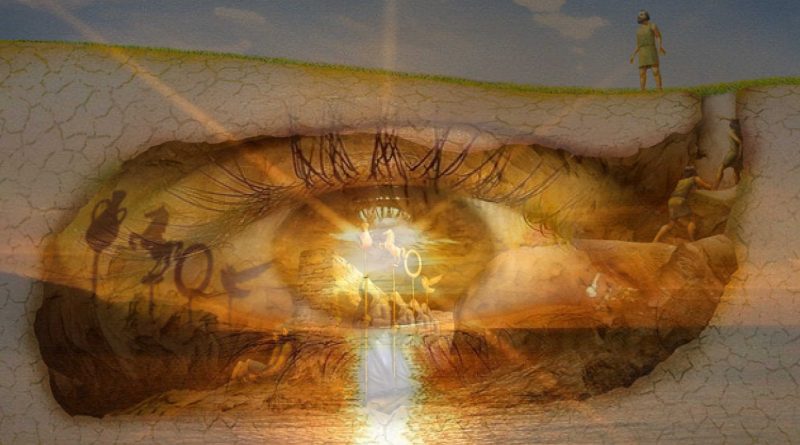 As she lets her mind drift in the predawn hours, there are often unbidden and unexpected images that play within the inner visual field. Not a scholar nor well read in philosophy, still she penetrates the field of perception.

She now sits looking at the blank computer screen; she will allow the Beloved to use her fingers in an attempt to allude to the uncapturable—that which is always and everywhere present found in the cloud of unknowing.

Like a film slowly developing in solution, there appears an image of the allegory of Plato’s cave; it plays in her mind; she sees the people chained to a wall watching the shadow images on the screen. The cave wall becomes the vast simulacrum of our realm, the constant play of images, information—the barrage of lies we are living through right now. It seems so real—this big screen projection that it’s hard to take one’s attention away from it for more simple pursuits. She turns her attention to the “projectionists,” and she sees they are but shadow creatures too.

There is a mass movement of human consciousness that is pulling back the multi-veiled curtains on the great deception; we are observers of the players, we detect the blatant lies—they are now open in their farcical narrative. She chuckles for some reason. It occurs to her that we are still inside the cave, thinking that by seeing through the lies we are becoming free. We are not, this is only one step to finding the exit. As long as we stay fixated on their intrigue, waiting for the next scene to play out we are trapped as the people who are chained to the doctrine of deceit.

I’ve questioned and become uncomfortable with how much of my time and energy is utilized in looking for the next chapter in their narrative; there remains a subtle impulse to be someone in the know, someone who has amassed a great deal of information and knowledge. This isn’t bad; it’s necessary in many ways, for it arms me with information to share with those around me in my attempt to get them to question the pseudo reality that they cling to. That said, it’s also detrimental, for it is exactly what they count on: that we continue to participate in their shoddy story.

My contemplative time is well spent, for it’s birthed an aspect of self much closer to the real. Sitting silently with Source, the All-Father, God or whatever word resonates within has become the realization that I am no more and no less than a child of the Great Creator. Ego desires have been consumed in the fire of redemption, letting go of personality so that this character is recognized only as the container in which one moves within the world of illusion. The silent Observer eventually becomes one with Source, at first only in moments of grace and lucidity that guide like lanterns in the dark, though when one learns to swim in the great sea of Love, Grace becomes the constant. One finally humbles oneself before the song of the Infallible. It is the becoming of the radiant one, lit from within, that holds the key to the exit door. The state of being and knowing oneself as integral with Life is the greatest of all things to effect change. I’ve had so many affirming events that show me this is so.

“For when you fix your love on *him, forgetting all else, the saints and angels rejoice and hasten to assist you in every way—though the devils will rage and ceaselessly conspire to thwart you. Your fellow men are marvelously enriched by this work of yours, even if you may not fully understand how; the souls in purgatory are touched, for their suffering is eased by the effects of this work; and, of course, your own spirit is purified and strengthened by this contemplative work more than by all others put together.” —the unknown author of The Cloud of Unknowing. (14th century manuscript)

*please allow for the use of him in this quote, for in truth it is the consubstantial nature of the Trinity as I comprehend—Creator, Creation and the Holy Spirit. If one delves the multiple disciplines of true physics, theology, the writings of mystics and poets, it is clear that creation would be non-existent without this being true.

Further contemplation along this pathway brings me to the realization that this is the return to our divine innocence, for once we return to our rightful home we indeed become like playful children. The wounds of eons of time are healed and forgotten—yet the wisdom we suffered to learn quietly abides within the soul.

As is the way that Truth spreads I was surprised, yet not surprised, to hear so many of those whose voices are revealing truths referring to Plato’s allegory of the cave over the past few days. Though few have yet found the key to the exit door.

“And so I urge you: go after the experience rather than knowledge. On account of pride, knowledge may often deceive you, but this gentle, loving affection will not deceive you. Knowledge tends to breed conceit, but love builds. Knowledge is full of labor but love, full of rest.” —the unknown author of The Cloud of Unknowing. (14th century manuscript)